Jan Vertonghen is the most expensive recruit in the fledging Andre Villas-Boas era, but he knows he must fight to earn his place in the Tottenham Hotspur side. 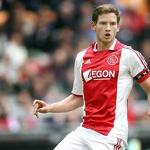 A number of clubs had expressed an interest in the Belgian international in recent times, including Arsenal and Newcastle United, but Spurs secured his signature when they paid Ajax £9.6million for his services last month. The Dutch club had hoped to retain the 25-year-old, but with his contract in its final 12 months, they were always fighting a losing battle.

With Ledley King announcing his retirement, there was certainly room in Villas-Boas’ squad for another central defender. As Michael Dawson is expected to replace the 31-year-old as club captain his spot in the starting eleven seems assured, and Vertonghen is expected to line up alongside him. However, with Steven Caulker, Younes Kaboul and William Gallas also in contention, the new man is taking nothing for granted.

Villas-Boas, meanwhile, is still thought to be in the market for a new goalkeeper. With Brad Friedel turning 41 at the end of last season, the Portuguese coach wants to find an eventual successor to the American veteran. Hugo Lloris, the France international, may prove difficult to obtain due to Lyon’s reported asking price of £16million, whilst Julio Cesar has denied making comments he is approaching the end of his time at Internazionale.

The Italian side have spent over £10million on Udinese’s Samir Handanovic this summer, and the Slovenian has been handed the number one jersey. Although Julio Cesar insists he has not made a decision to leave the Nerazzurri, he has been a regular for the past seven years so is unlikely to be too receptive at spending any length of time on the bench. The 32-year-old Brazilian, who has 64 international caps, is under contract until 2014.