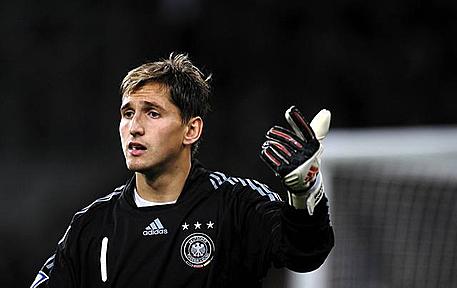 Rene Adler claims to have twice rejected a move to Arsenal, but has hinted that he would be prepared to accept a third offer should it arrive.

The 28-year-old has long been considered as a fine goalkeeper, and his reputation remains intact despite the fact none of his counterparts have conceded more than the 22 goals he has picked from the back of the net in the early stages of this season. Of course, such a poor defensive record cannot be solely down to him, and it also has to be recognised that six were shipped at a rampant Borussia Dortmund back in September.

Adler, who has 12 national caps for Germany, has been at his current club since last summer when he joined them upon the expiry of his contract at Bayer Leverkusen. Although he remains tied to Imtech Arena until 2017, he has been linked with a January move to Arsenal.  And despite snubbing a move to the London giants twice previously, he has now hinted that should a third offer arrive, he would be prepared to take the plunge.

“When I was 15 there was the opportunity to move to Arsenal, but I decided to go to Bayer Leverkusen to get a professional contract there,” he said. “There was also contact after the Under-20 World Cup in the Netherlands (2005). I’d like to play in England in the future. Football in England is some kind of religion. The fans, the culture behind the big clubs is very interesting. It’s a big honour for me if a club like Arsenal are interested in me.”

Despite Adler’s claims, Wojciech Szczesny has been in good form for Arsenal this season after last term struggling to make progress. The Poland international has started every Premier League and UEFA Champions League match for the Gunners, and appears to have been rejuvenated since the summer loan arrival of Emiliano Viviano.

Indeed, speaking just earlier this month, Wenger reiterated his belief in the 23-year-old, and offered the opinion that he could remain the regular number one at the Emirates Stadium for the long term: “I was always convinced he would make it here and the speculation linking Arsenal with another goalkeeper in the summer didn’t come from me,” he said. “He has already played two full seasons in the Premier League and can only get better.”

Adler would unlikely leave Hamburg in mid-season to play second-fiddle to Szczesny for Arsenal, regardless of the pull of the Premier League and the riches on offer. Should he make the move and see out the majority of the second half of the season on the bench, he knows he would be placing his World Cup ambitions in jeopardy. Szczesny, meanwhile, also needs the regular first team football at the highest level to continue his development, and Wenger also appears determined to ensure the Pole fulfills his huge potential.