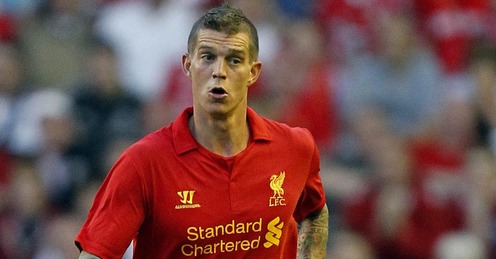 Daniel Agger has hailed the current atmosphere within the Liverpool dressing room, claiming the players believe the good times are returning to the club.

The Reds have been in a period of transition for some time now, despite winning the League Cup under Kenny Dalglish in 2012. They have not won the league title since the same manager led them to glory during his first spell in charge in 1990, and have not competed in the UEFA Champions League since the 2009-10 campaign.

Since succeeding Dalglish in the summer of 2012, Brendan Rodgers has overseen a period of steady improvement, most notably this season as they once more compete for a top-four finish. Currently, they are in the last qualifying place for the Champions League, just six points behind league leaders Arsenal, and are in the FA Cup fourth round.

With players such as Philippe Coutinho, Daniel Sturridge, Steven Gerrard and the improving Jordan Henderson on board, and of course the brilliant Luis Suarez, these are positive times in the red half of Merseyside. And defender Agger has revealed that this is a feeling shared in the dressing room, where morale is at a particular high.

“There is a much different atmosphere in the dressing room,” the Denmark international told Jyllands-Posten. “It’s like we truly believe that we are going to win and that is not something we have done in the last couple of years. We are winning games, playing some great football and scoring a lot of goals. We have proven that we can challenge.”

Agger, meanwhile, has been linked with a move away from Anfield this month despite his contract running until the summer of 2016. Yet speaking to the same publication, the 29-year-old said: “I’m not thinking about moving at the moment, not at all. I can’t really do anything about it. There is no reason to believe these rumours.”