David Moyes’ team selection for the 217th Merseyside derby may have drawn criticism from some quarters, but the Everton boss could yet have the last laugh in May. 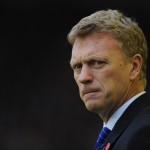 As he prepared to celebrate a decade in charge of the Toffees, Moyes knew that if his side inflicted a fourth successive defeat on Liverpool they would leapfrog their great rivals in the Premier League standings. For the sake of local bragging rights, this was an opportunity, with just ten games remaining once the full time whistle blew, for the Goodison Park faithful to allow themselves to dream about the possibility of their heroes finishing above the old enemy for the first time since the 2004-05 campaign, and just the second since they were crowned champions back in 1987.

So it is perhaps understandable for those of the blue persuasion to air a sense of bemusement, even disappointment, when they discovered their starting line-up on Tuesday night. Six changes were made to the team which beat Tottenham Hotspur on Saturday, including places on the bench for Nikica Jelavic, who scored the only goal against Harry Redknapp’s men, Leon Osman and Royston Drenthe, but whilst these three entered the fray shortly after the hour mark of the derby, Tim Cahill, Johnny Heitinga and Phil Neville watched the entire proceedings from the dugout.

Kenny Dalglish, on the other hand, was eager to rediscover the feel-good factor which followed their Carling Cup success but has since fallen flat following defeats against Manchester United, Arsenal and Sunderland. The Reds manager fielded arguably his strongest eleven – including the trio of Luis Suarez, Andy Carroll and Steven Gerrard – and was rewarded with a hat-trick from the latter, who became the first player to achieve such a feat in one of these matches since Ian Rush hit four in 1982.

And although Moyes will now enter the 2012-13 season still looking for a first win at Anfield, his team selection on this occasion can be forgiven. The former Preston North End boss has made no secret of his pride at ten years at the helm of Goodison Park, but by the same token, he is always the first to acknowledge that during this time, he has yet to add to an honours list which has been stagnant since 1995.

And with a place in the FA Cup semi-finals, not to mention a trip to Wembley, at stake when Sunderland visit on Saturday afternoon, he weighed up his options and asked himself what he wanted more: brief bragging rights over his neighbours who are likely to finish higher in the pecking order come the end of the season anyway; or the luxury of being able to pick his strongest side at their freshest in the aim of taking a big step to ending a seventeen-year trophy drought?

Of course, there is no reason why a strongest possible Everton couldn’t have won both games, and usually all managers should be encouraged to always pick those players best equipped to get results. But in these days when a place in the top four is considered by some as almost worthy an open-top bus parade, Moyes should be applauded: to be ahead of their rivals, albeit for what would likely have been a fleeting spell, would have been welcomed, but this isn’t what he wants to look back on this season and remember; nor would a top-eight finish be much cause for celebration.

What Moyes wants is a trophy. Something for the fans of the club to remember for years, just as they still fondly recall Joe Royle’s Dogs of War who defeated Manchester United at Wembley in 1995. Something so momentous they can issue a DVD of it at the end of the season and stock in their club shop for generations to purchase. Something for their captain to hold aloft on a bright sunny August afternoon prior to the first home game of next season. An entry on the honours list.

None of the above are awarded when a ninth placed side beat a seventh placed side in a mid-March meeting, regardless of the history and glamour of the fixture. But win the next three games in the oldest club cup competition in the world, and you can bank on it. So if Moyes feels Everton should place more importance on winning the FA Cup than putting one over their old rivals and potentially risking a place in the semi-finals, then good on him. And who knows? Maybe these two sides will meet again at Wembley on May 5th. And if they do, you can bet your life Moyes won’t field a weakened side then.