If the FA can’t punish Mario Balotelli for his challenge on Alex Song because Martin Atkinson claims to have seen it, then what action is being taken against the referee? 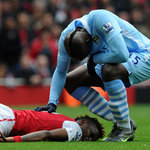 The Manchester City striker, who was eventually shown a red card for two bookable offences on Sunday, caused controversy earlier in the match with a studded challenge on Arsenal’s Alex Song which, to the surprise of those watching on television and the majority inside the Emirates Stadium, went unpunished. The referee must clearly have been unsighted, or so we thought, but even so, when the incident was brought to his attention after the match a retrospective ban seemed certain. Even Roberto Mancini admitted afterwards that his Italian compatriot was unlikely to wear the Blues shirt again this season, before suggesting he may even sell the 21-year-old striker.

However, Atkinson told the Football Association on Tuesday that he had in fact seen the incident. And due to the existing disciplinary system, this meant that no action could be taken against Balotelli. But if he did indeed witness the challenge, which supposedly left stud marks on Song’s shin, then how could he not have branded even a yellow card? Incredibly, the challenge didn’t even warrant a free-kick – how could this be possible if, as he claims, he saw the incident which left the Arsenal midfield lying on the turf? Did the referee feel the Cameroon international was playacting?

Earlier on the same Sunday afternoon, another shocking piece of officiating took place at Old Trafford. Ashley Young, standing in an offside position, didn’t so much as take a fall when tapped by Sean Derry in the penalty box, but more like a twist and a dive to earn Manchester United an early penalty. Wayne Rooney stepped up to convert the spot kick, and Queens Park Rangers were forced to play the remaining 76 minutes of the match with ten men after Lee Mason sent off their defender.

Yet whereas the footballing world were expecting Balotelli to be issued with a ban and for Derry’s card to be rescinded, this wasn’t the case; the City striker escaped punishment, whilst the Rangers man was told his suspension would be upheld after Mason, rather than admitting a mistake millions on television witnessed, stood by his guns and insisted he was right to show the red card.

Regardless of what directives they are instructed to follow, the FA should be able to make a stand and use common sense in cases like these. So what if Mason refuses to accept he made a mistake? It is clear Young took a dive, and perhaps it is he, and not Derry, who should be facing a ban. We all accept officials make errors – they are human after all – but what makes it worse is when they refuse to admit them, and this particular referee has done little to enhance his reputation.

As for the Balotelli incident, so what if the referee took no action at the time even if he did see it? He was wrong to let it pass without penalising the player and if everyone else – including Mancini – agrees, why can’t the FA? And if he did see the challenge, and then witnesses it again and STILL claims he was right not to even award a free-kick, then when does Atkinson receive his punishment not just for his awful decision making, but for refusing to aid justice by admitting when he is so clearly in the wrong?