Wayne Rooney had hoped to pull on the blue jersey of Everton again on Wednesday night, until he realised he had to turn up to represent his current club instead. 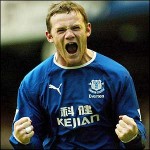 The England international made his name at his boyhood club, with his association with the Toffees beginning when he joined their youth system at just nine years of age. He burst onto the first team scene in explosive fashion as a 16-year-old, but despite declaring his undying love for the club, he wore a different shirt altogether before he was even 19.

Sir Alex Ferguson paid £26.5million to take Rooney across the North West to Manchester United, where the striker has since won the grand total of four Premier League titles, two League Cups, a UEFA Champions League and a FIFA Club World Cup. But if he thinks those he left behind are proud of such a haul, he couldn’t be more wrong.

Rooney became public enemy number one in the blue half of Merseyside the moment he decamped for Manchester, and his habit of kissing the badge of his new club has hardly helped improve relations. He is constantly booed whenever his boots set foot on the Goodison Park turf, but he was desperate to do so again on Wednesday night.

The 26-year-old put his name forward to feature in Tony Hibbert’s testimonial match at Goodison, in which the Toffees will take on AEK Athens. However, the little matter of a pre-season friendly between Barcelona and United, the club which pays his handsome salary, means he will otherwise be engaged in Gothenburg.

“Yes, Wayne wanted to play,” Hibbert told the Liverpool Daily Post. “It has just worked out that Manchester United have a game. He was quite upset when he realised.  It says everything about Wayne that he was willing to do that. He probably would have got a bad reception but he is not fazed about that.

“He loves Everton.  Deep down he is still an Evertonian. I know for a fact that he still goes to games. He will do anything for Everton. It was a great honour for me that he wanted to play in the game. I think it is possible he could finish his career at Everton. If Wayne says it, then I think the club would be stupid not to welcome him back.”

Rooney made his debut for the Toffees as a 16-year-old back in 2002, and just five days before his next birthday, he announced his talent on the big stage when he scored a sensational late winner Arsenal, which ended the then-champions unbeaten run of 30 matches. He went on to make a total of 67 league appearances for the club, scoring 15 goals, before sealing his transfer to Old Trafford in 2004.

*Tony Hibbert will donate the proceeds from his testimonial match to Claire House and The Rainbow Trust. For more information on these charities, please see below links: