Alex Song is set to sign a five-year contract at Barcelona, whilst Arsenal will look to replace the midfielder with Turkish international Nuri Sahin. 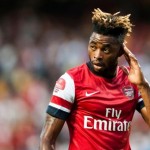 Cameroon international Song joined the Gunners on a season-long loan deal in 2005, and signed a permanent contract a year later for just £1million. The former Bastia youngster has improved in recent years and was recognised as a key player for the Gunners, but Arsene Wenger is seemingly happy to let him leave the Emirates Stadium this summer.

Barca initially showed interest in the 24-year-old last month, and they have now confirmed that a deal, believed to be in the region of £15million, has been agreed between the two clubs. Song will now travel to the Camp Nou to undergo a medical before penning a contract which is due to run until the end of the 2016-17 season.

Their official Twitter account read: “FC Barcelona has agreed a deal with Arsenal FC for the transfer of Alex Song to the Camp Nou. Song will sign for the next five seasons with a release clause of €80million. On Monday he’ll have a medical and then join the rest of the squad for the official team presentation at the Gamper.”

And a statement from Arsenal read: “Arsenal Football Club can confirm that terms have been agreed for the transfer of Alex Song to Barcelona. Song will now travel to the Catalan club to agree personal terms and undergo a medical ahead of the proposed move.”

During his seven-year stint in North London, Song made 136 appearances in the Premier League, scoring seven goals, and also played a dozen times for Charlton Athletic in the 2006-07 campaign. Last season was arguably his best since arriving in England, missing just four league games and assisting in ten goals as the Gunners finished in third position.

The midfielder is the second big-name departure from Arsenal in recent days, after Robin van Persie sealed his £24million move to Manchester United on Friday. Wenger will now be under more pressure to add to his squad ahead of the 31 August deadline, with Real Madrid’s Nuri Sahin widely reported to be at the top of his wanted list.

The Turkish international left Borussia Dortmund for the Bernabeu last summer, but a knee injury hindered his start to life in Spain and he was never able to secure a place in the side. Just two of his four appearances came from a starting position, and Jose Mourinho is prepared to let him leave the club, with England his likely destination.

Wenger had initially hoped to take Sahin on a loan deal for the season, with a view to a permanent move in 12 months time. However, now the Arsenal back balance has been boosted by the departures of van Persie and Song, he may instead opt to for a straight-cash transaction now, especially as Liverpool are also thought to be interested in the 23-year-old.

Another potential target for the Emirates Stadium club is Yann M’Vila, who has long been on Wenger’s radar. The French coach tried to sign his compatriot last summer, but refused to meet Rennes’ asking price of a reported £22million. However, with the Ligue 1 club now rating the 22-year-old midfielder at a more realistic £14million, a deal could be resurrected.

The Gunners will also be encouraged by the fact that Rennes have just signed Jean Makoun from Aston Villa in a £6million transfer, with many citing the Cameroonian was signed as a replacement for M’Vila. Furthermore, Wenger could have a free run on the France international, after Andre Villas-Boas, manager of rivals Tottenham Hotspur, revealed that his own interest in the player has come to an end.