Queens Park Rangers have distanced themselves from speculation linking them with Dimitar Berbatov, but just where will the Bulgarian be plying his trade this season? 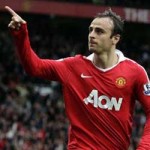 The 31-year-old top scored as Manchester United won a record title number 19 in 2010-11, but last season he was largely overlooked by Sir Alex Ferguson and appeared in just 12 Premier League matches. His return of seven goals proves he still has what it takes to cut it at the top level, so with a £5million price tag on his head, he is sure to prove a bargain for whichever club is lucky enough to land him this summer.

In many ways it is a surprise that he hasn’t already been snapped up. This is a player who cost the best part of £31million four years ago, has experience of winning two league titles, scored 48 times in 77 internationals, and has a record of a goal in every 2.3 matches. Turkish giants Galatasaray were said to be leading the chase for his signature, but it has been suggested they refused to meet United’s asking price, as generous as it appears.

Milan would seem to be a perfect fit after they sold Zlatan Ibrahimovic to Paris St Germain, but the Italian giants have so far failed to make an approach; likewise Serie A rivals and champions Juventus, who are still sniffing around Arsenal’s Robin van Persie. Tottenham Hotspur, his former club, have also been linked with offering him a return to White Hart Lane, but Manchester City’s Emmanuel Adebayor remains their first choice.

Every one of the above clubs would be able to offer Berbatov European football in one form or another this season. QPR, as ambitious as they are these days, would not be in such a position, yet they are the latest to be linked with the forward. Mark Hughes, himself no stranger with leading the line at Old Trafford, has distanced himself from the rumours, insisting the name of the brilliant Bulgarian has not crossed his lips this summer.

A move to Loftus Road would certainly guarantee Berbatov a regular start in the Premier League every weekend, and the lure of a return to the capital would likely appeal. He would also be reunited with former team-mates Ji-Sung Park and, for a season at least, Fabio da Silva. But the lack of European football, a stage on which he still has the quality to grace, would likely end his interest in making a move to Rangers.

If the striker fails to secure a transfer before the 31 August deadline he will be welcomed back into the fold by Ferguson. But with Wayne Rooney, Javier Hernandez and Danny Welbeck all ahead of him in the pecking order, it could well be another frustrating campaign for the most expensive signing in United’s history.