Wayne Rooney will this week discover the length of his suspension after being dismissed in Podgorica, but he should still be an integral part of Fabio Capello’s Euro 2012 plans. 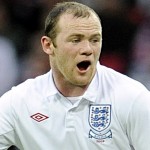 The Manchester United striker suffered one of his flashes of stupidity on Friday night, when he needlessly kicked out at Montenegro defender Miodrag Dzudovic. Referee Wolfgang Stark had little option, regardless of the thoughts of goalkeeper Joe Hart, but to issue Rooney with the second red card of his international career.

The first time the 25-year-old was sent off whilst representing his country was, who could forget, in Gelsenkirchen when it was Ricardo Carvalho, the former Chelsea defender, who was the victim of his petulance. Sven Goran Eriksson’s side went on to crash out of the World Cup Finals that day, when Cristiano Ronaldo’s Portugal eliminated them following a penalty shoot-out. That time, Rooney’s red card cost his side. Without him, his team-mates were forced to play the bulk of thirty minutes regular time with ten men, not to mention a similar length of extra time and the resulting spot kicks, of which he would certainly had took one.

This time, Fabio Capello’s men must play at least one of their Euro 2012 group games without the Liverpudlian, possibly two or, at the very worst, all three.  This has led to debates over the validity of including him in the squad for Poland and Ukraine. Some say England can’t afford to carry any passengers amongst their playing squad (although, Theo Walcott may argue, they often do), when they attempt to progress in a tournament which they have never previously bettered a semi-final spot. He deserves to be punished for his latest moment of madness, others have said, and the only way he will learn will be if his Italian coach comes down hard on him.

Yet despite all the frustration his red card has produced, the fact remains that even if Rooney were to be hit with the hardest possible ban, Capello knows it would be footballing suicide to leave out his best player. For one, if England are relying on one player to get through the first phase of the tournament then we may as well all pack up now. There is enough quality available to reasonably expect, at the very least, a place in the second round.

And once this is achieved, what sense would it be to have Rooney sat on a beach elsewhere? Because whilst England should, barring the proverbial Group of Death, progress to the knockout stage, it is hard to see them getting much further without their talisman. And besides, if Capello were to banish him to a second successive summer devoid of football, what are the alternatives, who are the other men capable of filling his boots?

After the 2-2 draw against the Montenegrins, Capello revealed Rooney would not take part in the friendly against Spain next month, before reeling off a list of alternatives who could feature. Jermain Defoe, he opined, was impressive for Tottenham Hotspur in their recent win against Arsenal. Chelsea’s Daniel Sturridge, an omission from the party which travelled to Podgorica, was also mentioned. Others included Aston Villa’s Darren Bent, Rooney’s team-mate Danny Welbeck, Liverpool’s Andy Carroll, and Bobby Zamora of Fulham.

The most prolific of those six names is Defoe, who has fifteen goals in 46 caps, followed by Bent whose goal on Friday was his fourth in eleven. Carroll has one in three, whilst the largely untried Welbeck and Zamora are yet to get off the mark in two each. Sturridge, who has shown huge potential this season, is yet to be capped. That’s a total, then, of six strikers, 64 caps, and 20 goals. Rooney, on his own, has 73 caps and 28 goals. So by all means, vent frustration at his latest act of stupidity and his potential ineligibility for the group phase next summer. But leave him out of the squad altogether? Now that really would be stupid.