Roberto Mancini believes Adam Johnson could become one of the best wingers in the world, but is the Manchester City star prepared to rise to the challenge? Tom Matley writes… 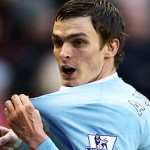 Adam Johnson would appear to be at something of crossroads in what can probably no longer be called his fledgling career. At 24 years old, with over 50 Premier League appearances made and approaching his second anniversary at Manchester City, the winger is facing sustained public criticism from his manager, and is being increasingly questioned by the City faithful about his suitability for the job at a club with such lofty ambitions.

Johnson was signed by City in the January 2010 transfer window immediately following Roberto Mancini’s appointment, and whilst there may be a question mark over the weight of the Italian’s influence in the Johnson deal (many suggest that confusingly titled “Football Administration Officer” Brian Marwood was the chief architect), there is little doubt that the winger occupies a unique place in the City squad. Mancini has been quick to point out on several occasions over recent months that Johnson is the only player at the club who offers him the option of genuine width. That might have changed had City been able to land their principle summer target Alexis Sanchez, but with the Chilean opting for Barcelona over Manchester, Johnson’s role at the club came into sharper focus.

Mancini has preferred to utilise Johnson on the right in this fashionable era of the ‘inside out’ winger, and he has the attributes to fulfil that role well: nimble, quick, confident in making use of both feet, and with Micah Richards overlapping when Johnson looks to foray infield he ought to offer a genuine and consistent threat against any team. It is that consistency that Mancini craves so desperately from him, and it is the lack of consistency – particularly against the perceived bigger clubs – which led to the winger being left out of the match day squad for City’s comprehensive victory at Old Trafford.

For now, Adam Johnson remains a highlight reel player. Looking good on Match of the Day in a comfortable City victory and capable of moments of brilliance, but inevitably floating out of games for 20 or 30 minutes or longer at a time, and not often able to influence games when things are tight or the chips are down. His stock sometimes appears to be much higher outside of Manchester than it is in it: rumours of £15million+ bids from Chelsea and Liverpool were welcomed by some City supporters in the summer, fans of other clubs express an eagerness when his availability is mooted, and pundits enjoy his moments of flamboyance then express surprise at his being left on the bench for yet another game.

If all this sounds a little harsh, let me make clear that the real desire amongst City fans is for Johnson to improve, succeed and become the player that he has the potential to be, but there is much scepticism about whether he can and will achieve that.

So despite the terrific equaliser and exquisite assist for Samir Nasri at Wolverhampton Wanderers in the Carling Cup we might begin to understand why Mancini, when challenged in his post-match interview over his recent use of Johnson, did not take the opportunity to praise the winger for his performance and instead focused on how his failure to track back contributed to Wolves being able to grab themselves a consolation goal.

It was reported that Johnson initially refused to board the bus after that game and had to be coaxed on by team mates. There are definite signs that Mancini believes that a little conflict is no bad thing at times and the gauntlet has been laid squarely down by the City boss here. “If he were not a good player I would not waste my time on him”, Mancini said this week, and if Johnson’s anger is perhaps to a degree understandable, equally so is Mancini’s approach to the situation.

It’s up to Adam, now. If he knuckles down and reacts to this challenge in the right way, he could – as Mancini says – develop into one of the best wingers in the game over the next seven or eight years. If he takes the alternate path then City will quickly outgrow him and he’ll likely end up as little more than a minor footnote in what promises to be a great spell of success for the club. It’s decision time for Adam Johnson.