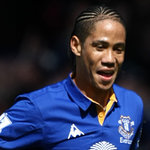 South African international Pienaar was a huge hit at Goodison Park during his first stint on Merseyside, which began in 2007 when he joined on a temporary deal from Borussia Dortmund. David Moyes wasted no time in triggering a pre-arranged agreement to sign the now 30-year-old for £2million in the following April, but with his contract winding down, the player joined Tottenham Hotspur in January 2011.

Pienaar failed to find his best form at White Hart Lane under Harry Redknapp, who used him in just ten Premier League matches before agreeing to let him return to the Toffees in January to see out the remainder of the season. The midfielder featured 14 times for the Blues in the second half of the campaign, scoring four goals, and Distin hopes to be lining up with him again when by the time Manchester United visit on August 20.

“Steven is the priority,” the French defender told the Liverpool Echo. “When he came back last season, he changed the way we played. It was good to see him coming back. We have got everything crossed that he will be back soon. Hopefully we will keep everyone, get players like Pienaar and everything will be great.”

Whilst Pienaar is indeed expected to sign for Everton in the coming weeks, the situation has seemingly been stalled somewhat by the departure of Redknapp from Spurs. It remains to be seen how his replacement, former Chelsea coach Andre Villas-Boas, sees the future of the player, but he is unlikely to stand in his way should a suitable offer be made.