Ron Vlaar finally completed his move to Aston Villa on Wednesday afternoon, then revealed his desire to follow in the footsteps of three previous club greats. 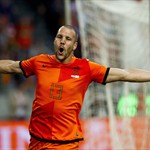 The Midlands club had been linked with the Feyenoord defender for several weeks, but it looked like the deal had collapsed when talks broke down last month. However, Paul Lambert remained determined to land the 27-year-old, and announced last Friday that the move was back on after personal terms had been agreed.

Vlaar has now successfully negotiated a medial with the Premier League side, and he has put his signature to a three-year contract. The Holland international, who scored for his country in a 6-0 win over Northern Ireland in June, has clearly been brushing on the history of the famous club, having revealed he intends to follow in the footsteps of three of their greats.

“I am looking forward to following in the footsteps of players such as Paul McGrath, Olof Mellberg and Martin Laursen, of course – all of them great players for this club,” he told the official club website. “I am very happy to be here and I am really excited about getting started. This is a dream come true for me. I know my best years are ahead of me.”

The three Villa legends referenced by Vlaar certainly set the bar high. Laursen is considered by some as one of the best defenders to have graced the club, and were it not for his injury problems, would no doubt have had more than the 84 league appearances he managed in the five years he spent at the club after arriving from Milan in the summer of 2004.

Mellberg was capped 117 times by Sweden before calling time on his international career following Euro 2012, and he spent seven years at Villa from 2001-2008. On his final appearance for the club, an away match at West Ham United, he bought a club shirt for every travelling supporter who had made the trip. The 34-year-old had a year at Juventus before moving to Greece with Olympiakos, and is currently a free agent.

Perhaps the master of them all is McGrath. Sold by Alex Ferguson in 1989 when the Manchester United manager thought the Republic of Ireland international was a spent force, the Ealing-born defender would go on to enjoy seven years at Villa, making 252 appearances and helping them to League Cup glory in 1994 – against his former club – and then again two years later, before moving to Derby County in 1996. Such is the regard in which he is still held at Villa, fans continue to sing his name to this day.

Meanwhile, Lambert has made room for Vlaar in his squad by offloading James Collins to West Ham United. The Wales international left the Upton Park club for Villa in 2009, but has now returned to the capital club after penning a four-year contract.