Cesc Fabregas insists he is totally committed to Chelsea, despite his long association with London rivals Arsenal.

The Spaniard first arrived in England when the Gunners lured him from Barcelona as a 16-year-old in September 2003, and he went on to spend eight years in the capital as he established himself as one of the best midfield players in the game. But a lack of silverware eventually frustrated Fabregas, who returned to his first love in the summer of 2011.

Despite helping Blaugrana win the Copa del Rey in his first season and La Liga title the following year, he was unable to cement a place in the starting XI and this summer decided to quit the Camp Nou for a second time. Although Arsenal had first option to take the 27-year-old back, they declined to take advantage and this allowed Chelsea to sign him.

Fabregas, who had previously indicated the Gunners were the only team in the Premier League he would play for, has made a fine start to life at Stamford Bridge, as Jose Mourinho’s side top the early-season table. Some fans, though, are still unsure about the Spain international due to his previous association with their great rivals, but whilst the player admits he will always feel something towards the Emirates Stadium club, his insists his allegiance is now blue.

“I will keep the Gunner feeling forever and I know that I will return to Highbury (Emirates Stadium) and it will be a special moment, but I am a committed guy,” he told El Pais. “I remind you that I played the UEFA Champions League final against Barcelona and I swear I would have done anything to win that game – and I have been a Barcelona fan since I was a kid. So I know that when I play against Arsenal I will know who is my (current) team, who are my colleagues and who I defend. And I know that the Arsenal fans will understand me.”

Fabregas will come up against his former club for the first time when they meet in the Premier League at Stamford Bridge in early October, whilst the return at the Emirates Stadium will take place at the end of April. And although the midfielder will relish coming face-to-face with Arsene Wenger and co, he admits it will be a strange sensation.

“If you’d told me five years ago that I would play for Chelsea and Mourinho I would not have believed you, but life changes,” he added. “I started to think about leaving Barcelona after the Copa del Rey final. It was when I started to think that it had finished, that there was a change or that I didn’t want to continue. I spoke with my agent and asked him to find me a new team, and an offer from Chelsea arrived. For me it was coming back to London, where I grew up. There was no better way out. I spoke with Mourinho and he told me the things I needed to hear. I felt valued. I felt I was going to be important in an important project.”

Chelsea fans, do you now consider Fabregas as one of your own, or do you still picture him in the red of your rivals? Let us know your thoughts by joining in the discussion below! 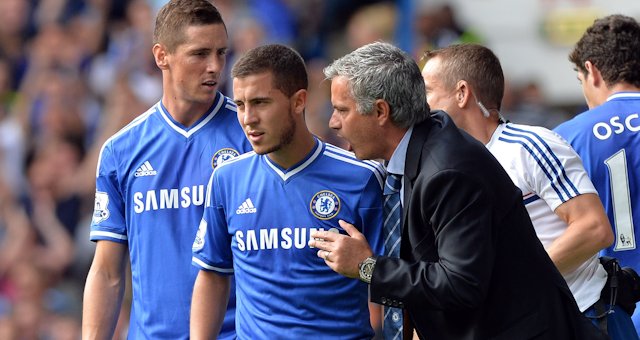