Sir Alex Ferguson is refusing to draw a line under the season just yet, insisting that Manchester City may still have a say in the destination of the title. 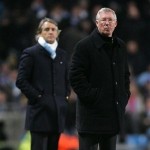 Late goals from Antonio Valencia and Ashley Young gave Manchester United a 2-0 win over Blackburn Rovers at Ewood Park on Monday evening, creating a five-point lead over their neighbours with just seven matches remaining. This could be extended to eight points by the time Roberto Mancini’s men take to the field at Arsenal on Sunday, as the Reds welcome Queens Park Rangers earlier in the day.

City’s form in the opening exchanges of the season, including a 6-1 win at Old Trafford and a 5-1 thumping of Tottenham Hotspur at White Hart Lane, made them favourites for the title, but as they struggle to reproduce their best, you will be hard pushed to find someone who believes they can now overhaul the reigning champions. But Ferguson, perhaps predictably, is refusing to write them off just yet.

“It could come down to goal difference, who knows?” Ferguson told Sky Sports following the win at Rovers. “We have still got seven games left and my experience of these situations is that it doesn’t matter what the points total is at the moment.”

The United manager, of course, knows better than to suggest anything other than the race is far from over. He will remember how his side crumbled to hand Leeds United the title in 1991-92, although it must be noted that this is an experience which he has largely been able to use to his advantage in subsequent years. A similar collapse now, particularly when considering the run-in – before travelling to the Etihad Stadium at the end of the month three of the champions’ four fixtures are at home, meaning the opposite applies to City – would be staggering.

As for the Blues, a few short weeks ago they viewed the derby on April 30 as potentially the date that would confirm a power shift in Manchester, yet now they fear this could be the day their archenemy clinch title number twenty. Before then, they must focus on the next test, a trip to the Emirates Stadium for a game in which the Gunners can little afford to lose if they are to finish in the top four. Whatever happens from now until the end of the season, this has been a learning curve for Mancini and his players, one similar to that his rival was forced to endure twenty years ago.