Steven Fletcher scored twice as Wolverhampton Wanderers came from behind to defeat Sunderland 2-1 at Molineux, under the watchful eye at Martin O’Neill. 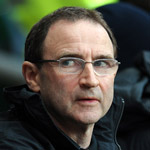 Although the Ulsterman will not officially begin his reign at the Stadium of Light until Monday morning, he was keen to be amongst the 25,154 crowd in the West Midlands to get a first sighting of his new charges.  And when Kieran Richardson gave the visitors the lead early in the second half with a powerful first time finish following a swift counter attack, it looked as though he may start his new job with spirits high in the camp.

However, the pivotal moment in the game came with eighteen minutes remaining, when Sebastian Larsson took a spectacular dive to earn the Black Cats a penalty kick. A second goal would likely have made the points secure, but the Swede’s effort was easily held by Wayne Hennessey. The Wales international then launched the ball forward, and within thirty seconds Matt Jarvis had supplied Fletcher with a cross which was then headed past Kieran Westwood.

Whilst many of the home players made their way to the Scot to celebrate his leveller, a couple also ran towards their goalkeeper to recognise his huge contribution to the goal. Later television replays, though, revealed that the 24-year-old was perhaps unfortunate to be facing a penalty at all, as Jody Craddock’s initial contact on Larsson appeared to be outside the area.

Eight minutes after the equaliser, Wolves were ahead. A cross from substitute Adam Hammill found its way to Jamie O’Hara, who looked to have used an arm to control the ball before laying it off to Fletcher to score his second goal. With trips to Manchester United and Arsenal included in their run into to the New Year, this was a big result for Mick McCarthy’s men, who have now moved four points clear of the relegation zone.

“It’s a great victory and a great three points. I’m delighted with it,” McCarthy told Sky Sports HD1. “It was a great atmosphere today. It was a superb goal they scored but the crowd stuck with us and it was a great team effort. My lads kept on going and that’s how we won the game.”

As for O’Neill, he starts work with his new club sitting in seventeenth position, just one point ahead of Blackburn Rovers. Crucially, the Lancashire club provide his first opposition on Saturday afternoon when Steve Kean takes his side to Wearside. With a trip to Tottenham Hotspur the following week, he will probably feel his first game in charge is already one he must win.