Giovani dos Santos was on form for Mexico in the Olympic Games on Sunday, which led to his national coach urging him to quit Tottenham Hotspur. 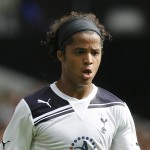 The 23-year-old was not long ago billed as one of the most exciting talents in European football, so it was something of a coup when Juande Ramos lured him to White Hart Lane in the summer of 2008. However, the former Barcelona starlet has failed to make an impression in England, having made just 17 Premier League appearances.

Giovani has had loan spells at Ipswich Town, Galatasaray and Racing Santander, and has also seen proposed permanent transfer deals collapse over the past 12 months. On the international stage, though, the forward has impressed, finishing second only to Germany’s Thomas Muller as FIFA Young Player of the Tournament at the 2010 World Cup Finals. The following year, he scored the Goal of the Tournament with this effort against the US in the CONCACAF Gold Cup final to wrap up a 4-2 win.

The Mexican has also supplied a reminder of his undoubted talent at the 2012 Olympic Games, coming off the bench to net both goals in a 2-0 win over Gabon on Sunday. And after the match, coach Luis Fernando Tena made no secret of his opinion that the Spurs man needs to find a new club ahead of the coming season.

“He definitely needs to find his rhythm,” he said. “He has the potential to achieve things and it would be better if he had that rhythm at club level. Unfortunately he doesn’t get that many minutes on the pitch at Tottenham. It will be better if he played more at club level and then he can give more to Mexico.”

Giovani feels he wasn’t given a fair chance at Tottenham under previous manager Harry Redknapp, but he has since indicated he may get a lifeline at the club under Andre Villas-Boas. The player has revealed he intends to establish if he has a future under the Portuguese coach after the Olympics, something the Londoners will be equally keen to resolve as the ex-Barca ace is now in the final 12 months of his contract.

If the two parties decide the time has come for a permanent parting of ways, then Spurs could reasonably expect to recoup the £6million they paid for his signature four years ago. Whilst he has failed to set the Premier League alight, his performances last season on loan at Racing ensures his stock remains high in Spain, and this, together with his age and displays for Mexico, still make him an attracting proposition for suitors.