More than a week has passed since the greatest night in the history of Chelsea Football Club, yet still Roberto Di Matteo is in the dark with regards to his future. 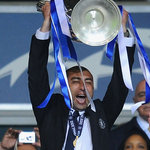 When Roman Abramovich recruited Jose Mourinho in 2004, he did so on the strength of the Portuguese coach winning the UEFA Champions League with unfashionable Porto that May. But three years later and despite a haul of two Premier League titles, an FA Cup and two League Cups, the Special One paid the price for not delivering the trophy that mattered most.

The Russian turned to another European champion in 2009, handing Carlo Ancelotti the opportunity to add to the two crowns he led AC Milan to. And although the Italian secured a first league and FA Cup double for the Blues in his debut season, Mourinho’s Internazionale did for them in the second round of this campaign. The following term it was Manchester United who denied them at the quarter-final stage, and the hunt for a new coach begun again.

The closest Chelsea came to realising Abramovich’s dream came under Avram Grant, who was just a John Terry penalty kick away from defeating United in the final of 2008. Never the most popular of choices, some wondered just how the club’s owner would have handed the Israeli had the former England captain not slipped and struck Edwin van der Sar’s left-hand post, but instead converted and won the giant pot.

Four years on, and perhaps we are now getting some idea. Having replaced Andre Villas-Boas in March, Di Matteo was expected to do little more than steady the ship for the rest of the season before moving on with a pat on the back in the summer. After all, what heights could be expected from a relatively rookie coach who had only last season been deemed too big a risk for a West Bromwich Albion side looking to simply avoid relegation?

But against all odds, the former Blues midfield player steered his side past Birmingham City, Leicester City, Tottenham Hotspur and Liverpool to get his hands on the FA Cup. But as impressive as that was, he saved his best for the Champions League. Overcoming a 3-1 first leg deficit in Naples, Di Matteo then orchestrated a quarter-final defeat of Benfica, before causing a sensation in Spain by dumping reigning champions, and some would say best team in recent times, Barcelona out of the last four.

Onto the final and Bayern Munich, played in the Bundesliga giants’ own back yard. Thomas Muller looked to have won it for the hosts when he scored late on, but Didier Drogba levelled in the dying moments, and it was then the Ivorian who scored the winning spot-kick to gift Chelsea a treble feat: firstly, to win them their first ever Champions League; secondly to deliver Abramovich the one trophy he has craved more than any other; and thirdly, to finally extinguish the ghosts that have lingered since that night in Moscow.

So all things considered, you would be forgiven for thinking this was more than enough to see Di Matteo off on his summer holidays with a new contract in his back pocket. That is until you remember this is Chelsea we are talking about, so more than a week after the greatest night in their history, he is still left waiting for the telephone to ring as he no doubt hears speculation of the likes of Fabio Capello, Pep Guardiola, and even Mourinho linked with a position he has filled admirably for the past three months.

Some suggest the disappointing league finish is causing Abramovich to have doubts. And whilst it is true that finishing outside of the top four is no longer acceptable for a club like Chelsea, this wasn’t enough to save the likes of Ancelotti when he needed support after failing in the Champions League. And besides, who is to say Di Matteo wouldn’t have finished higher in the table had he not so skilfully negotiated their Champions League passage, and instead focused all his attention domestically?

The irony is, had he instead led a rival side to Champions League and FA Cup glory in a little over three months, Di Matteo would probably be the number one target for Abramovich. But then again, some people just never seem to be happy.