He has only been in England for a little over 48 hours, but new Wigan Athletic signing Arouna Kone insists he is ready to make his debut on Sunday afternoon. 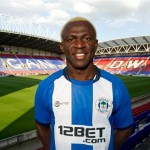 The Ivory Coast international joined the Lancashire side on Tuesday for an undisclosed fee, after agreeing a three-year contract. Kone was one of the star turns in Spanish football last season, having scored 15 goals during a loan spell at Levante, which helped them to a sixth place finish in La Liga.

Although this resulted in the Valencia-based club taking him from Sevilla on a permanent basis, they were happy to cash in on the 28-year-old shortly afterwards, at a profit, in order to help balance the books.  The striker is now looking forward to enhancing his name in the Premier League, and he insists he is ready to take on European champions Chelsea at Stamford Bridge this weekend.

“I’m impatient to get started with my new club. It’s a great challenge for me,” he told the official club website. “It’s up to the manager of course but I’m ready having done all of my pre-season with Levante. I feel great and I would love to be able to take part in such a big game. I’m going to give my all every time I put the shirt on this season and I’m sure we can make progress in the league. I really hope that the fans will be satisfied that I’m a player who gives everything.”

Kone first arrived in Europe in 2002, when he spent a season in Belgium at Lierse for whom he top scored with 11 goals in 32 games. This earned him a move to Holland with Roda, where he hit double figures in two successive seasons to catch the eye of PSV Eindhoven. Sevilla paid €12million to lure him in 2007, but he only managed a single goal in 40 league appearances before being loaned to Hannover in 2010. But it was last season, at Levante, which saw him rediscover his best form.

He scored his first league goal for the club in September, when his 68th minute strike was enough to inflict a shock defeat on Real Madrid. He also scored against Jose Mourinho’s side at the Bernabeu in February, albeit in a 4-2 loss. His overall return of 15 was the best of his career, and Roberto Martinez will be hoping he can continue in this vein of form in the coming months.