Tim Cahill has called time on his Everton career by joining the New York Red Bulls, but his popularity in the blue half of Merseyside is unlikely to wane. 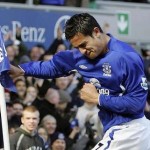 The Australian joined the Toffees in the summer of 2004 for an absolute steal at £1.5million, when David Moyes plucked him from Division One side Millwall. Not only would this eventually prove to be the Scottish tactician’s most shrewd acquisition in over a decade of service at Goodison Park, but perhaps also his most important.

He went on to make 226 Premier League appearances for the Blues, scoring 56 times, and established himself as one of the most accomplished midfielders in the country. Whereas his former team-mate Mikel Arteta left the Merseyside club for Arsenal last year, it was always something of a mystery how Cahill barely featured in the speculation pages over the past eight years.

In recent times the 32-year-old has struggled to recapture his very best form, hitting just two league goals last season, and with his first team place not as guaranteed as in the past, it is perhaps of little surprise that he has been allowed to move on. He was left out of the side in three of the last six matches at the end of the campaign, and this was something he maybe thought would continue next term.

But his iconic status with the Blues has long been secured, and his commitment to the cause has always been evident. Wayne Rooney’s vow of ‘once a blue always a blue’ may have been tarnished with many supporters since his move to Manchester United, but Cahill leaves the club with his own reputation well and truly intact:  “I’d do anything for this team, these fans, and this club,” he once said. “It’s an honour to play for Everton.”

Everton will save a reported £3million in wages in letting Cahill leave, yet this shouldn’t detract from the fact they could almost certainly have demanded a larger fee had they placed him in the shop window for rival top-flight clubs to see. Instead, they have accepted just £1million from the Red Bulls, and this is an example of rewarding a player for the unstinting loyalty he has shown them since his arrival.

Cahill will leave Blues fans with some special memories – his record in the Merseyside derby is the best of any Everton player since the legendary Dixie Dean – and his celebration of punching the corner flag after scoring provides an everlasting image. If Moyes decides a replacement can only be found in the transfer window, it is a certain bet he will have to fork out more than £1.5million this time.