Arsene Wenger may have passed his Italian test in the Stadio Friuli, but the Arsenal manager now faces a crucial few days in the club’s immediate future. 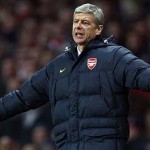 Defending a narrow 1-0 lead, the Gunners travelled to Udinese on Wednesday evening for one of the most important games in their recent history. And despite trailing to a first half Antonio Di Natale header, the Londoners struck back through Robin van Persie and Theo Walcott, sandwiched by a Wojciech Szczesny penalty save, to dispose of the Serie A side and progress to the Champions League proper.

Hours earlier they had finally accepted defeat in their quest to keep Samir Nasri at the club, as the Frenchman followed Cesc Fabregas through the exit door having rubberstamped his £23million move to Manchester City. So defeat against the Zebrette, and elimination from a competition they have featured in for the past thirteen years, would have been little short of catastrophic.

But, thanks to that gritty second half performance, the Emirates Stadium can now look forward to hosting Borussia Dortmund, Marseille and Olympiakos, having been pitted in Group F during the draw for the group stages in Monaco on Thursday afternoon. To still be in contention will be a relief to Wenger, but in many ways, the supporters are expecting a lot more from him before the transfer window slams shut on Wednesday.

With at least £30million said to have been made available before the summer market opened, and the sales of Fabregas, Nasri, and also Gael Clichy, the Frenchman can hardly plead poverty as he looks to add more depth to a squad which has so far greeted the arrival of just Gervinho, the Ivory Coast international, and the young trio of Alex Oxlade-Chamberlain, Carl Jenkinson and Joel Campbell. One problem he will likely face when attempting to do so is that the rest of the footballing world is also aware of his financial situation, so the chances are he may have to abandon his previous stubbornness and, at least in special cases, splash out more than he would usually like to in order to land his targets.

And what would qualify as a special case? It doesn’t take a genius to work out a centre-half is a priority. Scott Dann, relegated with Birmingham City last season, has long been linked, as has German international Per Mertesacker, currently at Werder Bremen. But it is Gary Cahill, of Bolton Wanderers, who would be the ideal partner for Thomas Vermaelen, but will Wenger pay the asking price of £17million as he, like the latter, is also in the final twelve months of his contract?

A new left fullback would also be welcomed, following the departure of Clichy. Wenger decided against lodging an offer for Jose Enrique, who has already produced two assured performances for Liverpool following his arrival from Newcastle United for just £7million. Instead, he has switched Bacary Sagna, one of the best right backs in the division, from his usual position to the opposite flank and given Jenkinson, still only 19, his chance to stake a claim. Yet this smacks of a stop-gap solution, rather than one which could help form half of a long-term back four.

In midfield, Wenger has already had an offer rejected for compatriot Yann M’Vila, who impressed against England back in November last year, but reports suggest he is now willing to go as high as £22million to persuade Rennes to part with the 21-year-old. Whether a new playmaker will be sought, following the departures of two key men in this position, remains to be seen, but there is a growing feeling that faith will be placed in Aaron Ramsey and, when recovered from an ankle injury, Jack Wilshere.

Where Arsenal may also need to strengthen is in attack. Gervinho should chip in with his share of goals, and Walcott is expected to finally be given the more central role he craves in a bid to finally hit double figures in a Premier League season, but the jury remains out on Marouane Chamakh and Nicklas Bendtner is still expected to be sold. Van Persie remains the great hope, and if he stays fit his track record indicates he will regularly find the back of the net, but can the Dutchman stay injury-free?

Now the Champions League qualifier is out of the way and the futures of Fabregas and Nasri are no longer causing a distraction, all eyes are on Wenger as the window nears. Has he left it too late to make the additions he needs? Only time will tell, but if he thinks victory in Udine has eased the pressure he should think again.