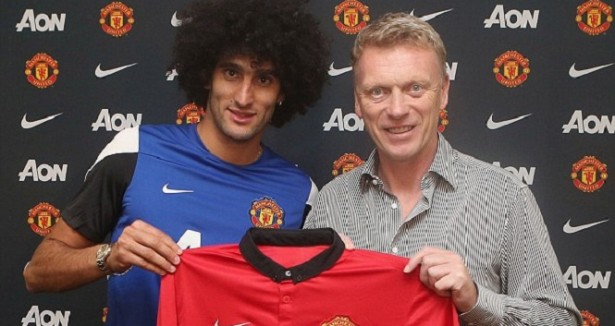 Marouane Fellaini was officially unveiled as a Manchester United player on Friday, and immediately announced his ambition to help his new team-mates to more glory.

The Belgian international had been linked with a move to Old Trafford for much of the summer, ever since David Moyes was confirmed as Sir Alex Ferguson’s successor. The former Everton boss could have signed the midfielder for £24million before the end of July, but instead only returned to Goodison Park on deadline day to secure his signature for £27.5million.

Moyes has revealed the reason for the delay was that he still hoped to take Leighton Baines from his former employers, and he felt he had a better chance of doing so if he offered them a package for the two players. He did make a bid of £28million for the pair on the eve of the new season, yet this was turned down by the Toffees who felt the offer was derisory.

Although Baines remains on Merseyside Fellaini secured his move to Manchester after handing in a transfer request, which waived a loyalty payment in the region of £4million. Yet it is not money that matters to the 25-year-old ex-Standard Liege man, who announced on Friday that he is eager to help the champions add more silverware to their already vast honours list.

“With the chairman at Everton you never know,” he said. “Sometimes I think there is no chance for me to join Manchester United. But in the end I was so happy because the chairman accepted the deal. It was a big opportunity for me to join one of the biggest clubs in the world. I want to win trophies. I play football for this. With Manchester United I have a big chance to win something.”

Fellaini is expected to make his debut for the Reds on Saturday afternoon, when Premier League new-boys Crystal Palace make the journey north. It has been a mixed start for Moyes, having won one, drawn one and lost one of his first three games in charge. Last time out was a 1-0 defeat at Liverpool, and he will be determined to bounce back against the Eagles this weekend.

Palace boss Ian Holloway is confident that Moyes will be a success at Old Trafford, although he also believes that following a legend like Ferguson could take time. As for the weekend, he has refused to subscribe to the theory that this is a good time to take on the champions, despite his opinion that his opponents are in something of a transitional period this season.

“At this moment in time they are in a transitional period,” he said. “They’ve got a new manager, who was chosen by the last one. To hear ‘I want him to replace me’ must be an honour. But the fact of the matter is David has to make his mark on Manchester United – I’ve got to make my mark on Crystal Palace. Is it a good time to play them? I will tell you after the game.”