Phil Jagielka has urged Everton to build on their impressive opening win over Manchester United, and enjoy a rare good start to the season. 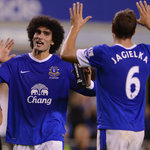 Speaking to Sky Sports after their 1-0 win over Sir Alex Ferguson’s side, Phil Neville told his brother Gary that the Toffees have benefitted from doing their transfer business early this summer.  Yet in truth, there haven’t been many additions to David Moyes’ squad: three players have been signed yet only one of these, Steven Pienaar, started on Monday night, and he was there on loan last term anyway. Steven Naismith made his debut as a late substitute, whilst the addition of Kevin Mirallas came too late for him to be involved on Monday night.

The Belgian forward, signed from Olympiakos for £5.2million, was introduced to the home fans ahead of the match, yet it was his compatriot Marouane Fellaini who was dominating the conversations of those in attendance at Goodison Park. Not only did the 24-year-old score the only goal of the match – a header from a Darron Gibson corner in the second half – he was a constant thorn in United’s side, just as he had been in that memorable 4-4 draw at Old Trafford last season which had such an impact on the destination of the Premier League title.

If selling Jack Rodwell to Manchester City allows Moyes to keep hold of the former Standard Liege man, then he would have few arguments in the blue half of Merseyside. Time and time again he terrorised a makeshift defence, which included midfielder Michael Carrick in the heart of the back four alongside Nemanja Vidic, who was playing his first league game since December of last year, and Antonio Valencia, who so impressed on the right wing last term, at fullback.

Fellaini’s goal resulted in a first opening fixture win in five years for Everton, who are notorious slow starters. At the end of every season it is often remarked that had the Toffees found their post-Christmas form at the start of the campaign, they would be in the mix for UEFA Champions League qualification. Maybe such a finish will still evade them this season, due to the increasingly competitive Premier League, but Phil Jagielka has urged his team-mates to build on their win over United.

“It’s nice to send the Everton fans on the first day of our season home with a win and not the doom and gloom we normally start with,” the defender, himself one of the stars of the victory, told Sky Sports. “It’s a fantastic start for us. We’ll build on it for the next game, we’ve got a big game coming up over the weekend so if we can get another point away at [Aston] Villa, or three, it’s going to be fantastic start and hopefully instead of chasing the teams, we can maybe chased for once.”

Villa started their own campaign with a 1-0 loss at West Ham United, so will be eager to avoid a second successive defeat, particularly in Paul Lambert’s first match in front of their own fans. But after keeping out the likes of Wayne Rooney, Danny Welbeck, Shinji Kagawa and, for 20 minutes, Robin van Persie, Jagielka and co should be confident of denying a team which scored just 37 league goals all season last term, the lowest of any team in the division with the exception of Stoke City.