Ledley King has called for one final push from his Tottenham Hotspur colleagues, as they look to secure a place in the UEFA Champions League next season. 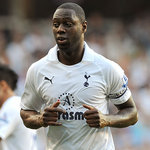 For a portion of the campaign it looked as though Harry Redknapp’s men would finish in third position, with an outside chance of catching the two Manchester clubs at the head of the ladder. However, a 5-2 defeat at rivals Arsenal at the end of February began a sequence of just one win in eight, a run which includes a further three defeats.

This has coincided with a fine succession of results from the Gunners, who have now overtaken their neighbours in third spot. Meanwhile, the surprise package of the season, Newcastle United, have recovered from a 5-0 drubbing at White Hart Lane to win five on the bounce and draw level with Spurs in fourth spot. And with Chelsea lurking in sixth position just two points behind, the race for the final Champions League position looks a lot tenser than the battle for the title itself.

Despite picking up just six points from a possible 24, King has rejected suggestions of a crisis at Tottenham. But with just five games remaining for them to secure at least fourth place, the defender has urged the more senior players at the club to lift the spirits in the camp and take them over the finishing line.

“There is not a crisis in any way,” he said. “It’s up to the senior lads to lift the spirits of the rest of the lads and keep them there. We can’t dwell on this. We have to stick together and keep working hard. That’s the only way. There aren’t many games now until the end of the season and we just have to give it a big push until then.”

An FA Cup semi-final against Chelsea provides Spurs with a welcome break from the top four battle on Sunday, before they resume their Premier League action with the first of two London derbies left on their calendar: they travel to Queens Park Rangers on 21 April and end the season with a visit from Fulham. In between they welcome Blackburn Rovers to the capital, before successive trips to Bolton Wanderers and Aston Villa. Redknapp will hope the latter are out of the relegation mire by this time, but three of his other managerial counterparts in the run-in are unlikely to be.

Chelsea perhaps have the most difficult fixture list of the contenders. Not only do they have to take into consideration the small matter of a Champions League semi-final double header with Barcelona, but they must also travel to Arsenal and Liverpool before the end of the season and have Newcastle at home, whilst they too also face sides battling against the drop in QPR and Blackburn, both at Stamford Bridge.

Apart from that away clash at Roberto Di Matteo’s side, Alan Pardew’s Magpies have home games against Stoke City and Manchester City, whose title bid could be over by 6 May, and visits to struggling Wigan Athletic and then Everton on the final day. Arsenal, who are favourites to wrap up third place, take on Wolverhampton Wanderers at Molineux on Wednesday, before successive homes matches against Wigan and Chelsea. Norwich City travel to the Emirates Stadium for the penultimate match of the campaign, a fixture which is sandwiched for Arsene Wenger’s side by visits to Stoke and West Bromwich Albion.