Vincent Kompany knows he and his team need help from Manchester United’s opponents if he is to hold aloft the Premier League title next month. 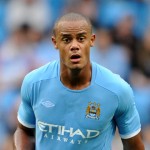 For the first time this season, Manchester City failed to win a home match when Sunderland left the Etihad Stadium on the back of a 3-3 draw on Saturday afternoon. It could have been even worse for the Blues, who at one point trailed 3-1 before goals from Mario Balotelli and Aleksandar Kolarov deep into the second half spared their blushes.

This result leaves Roberto Mancini’s men trailing United by two points, and this lead could be stretched to five if the reigning champions collect another win when they travel to Blackburn Rovers on Monday night. Indeed, by the time City take to the field at the Emirates Stadium to take on Arsenal next Sunday, they could be eight points adrift if Sir Alex Ferguson’s side beat Queens Park Rangers at Old Trafford earlier in the day.

United, who arguably have the more generous run-in from now until the end of the season, have suddenly emerged as favourites to retain their title, and City captain Kompany accepts that he and his team-mates are now relying on favours from the Reds opponents.

“The reality is it is not in our hands anymore. We need other teams to take points away from United and we (need to) finish the job when we play them at Eastlands,” the Belgian international told City TV. “That is the reality of what is happening now. We will keep believing, definitely. It is just not as easy as it was before.”

Ferguson, meanwhile, is expecting a tough test at Ewood Park, where they have won just twice in their last 11 visits. Rovers have already beaten United this season, 3-2 at Old Trafford on New Years’ Eve, and Steve Kean’s side remain in dire need of points if they are to avoid relegation.

“You can look at all the fixtures and say all those teams are fighting for their lives. And they are the kind of games you know will be tight,” said Ferguson. “The game at Blackburn has always been a difficult match.  It is a local derby and tends to be a bit feisty. It will be a very difficult game. That is the way it is going to be from now until the end of the season.”