With the start of another new season now very much within sight, Calvin Critchley is prepared to give La Liga another go…but he expects his main attention will remain on the Premier League. 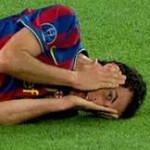 The last few years, and certainly in the near future, looks to belong to Spanish football. With Spain winning the World Cup in South Africa, Barcelona strolling to the UEFA Champions League and the Spanish Under 21’s making it a treble this summer, this generation of football looks to belong to ‘La Furia Roja’. This begs the question as to whether La Liga is the best footballing league in the world; despite the claims the English Premier League is by far the best in the world.

One reason in particular which puts myself and many others off watching the eye catching technical football of La Liga, is the constant diving, play acting and surrounding of referees. Many seasons I have contemplated getting into Spanish football, watching it week in, week out like I do with the English, however 90 minutes or so of any match in La Liga puts me off watching any other match, regardless of the style of fluent football played.

Agreed, the diving and moaning also goes on in our Premier League, but nowhere near to the extent of La Liga. I’m sure anyone in the world would rather watch Lionel Messi, David Villa and Cristiano Ronaldo over Wayne Rooney, Theo Walcott and Darren Bent, and perhaps the three foreign players mentioned are not the worst for the play acting. But it is the likes of Carles Puyol and Sergio Busquets in particular who, without question are good players, have another side of their game which is ruining them and this type of behaviour is only supporting the claims that the Premier League is the best league in the world.

Without question, I would rather watch the football of the Spanish, as the national team and the Catalans have proved that it is successful. But with this comes all the extras, something that you do not get half as much as in England, which has more passion for the game and players giving 100%, with the likes of Jamie Carragher and John Terry simply defending and leaving the attacking play and theatrics to the forward players.

Maybe this season I will give La Liga another try, but I am pretty sure the outcome will be the same, and I will be back watching the best league in the world, the Premier League!