Frank Lampard has watched on with interest as Chelsea have spent heavily on their midfield this summer, but insists he is ready to fight for his place in the starting XI. 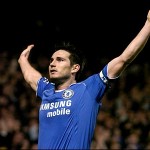 Andre Villas-Boas may have overlooked him at times last season, but aside from that, Lampard has been a key member of the Blues side since his £11million arrival from West Ham United in 2001. The 34-year-old has played a huge role in three Premier League successes, four FA Cup triumphs, two League Cup victories, and the icing on the cake came in May when he captained his team to UEFA Champions League glory in Munich.

The England international is a three-time club Player of the Year, is the only midfielder to have scored 150 goals in the Premier League era, and is behind just Bobby Tambling and Kerry Dixon in the Stamford Bridge outfit’s list of all-time goalscorers. All things considered, then, it is little surprise that he is recognised as a legend by supporters, yet many of these have been left wondering just how much of an involvement he will have next term.

Since that penalty shootout win against Bayern Munich back in May, Roberto Di Matteo has spent heavily on his midfield options. German international Marko Marin was the first to arrive in a £7million deal from Werder Bremen, and then a whopping £32million was spent to convince Lille to part with Belgian ace Eden Hazard. And this week, Brazilian starlet Oscar completed his £25million transfer from Internacional.

With Michael Essien, John Obi Mikel, Ramires, Raul Meireles, Oriol Romeu, Kevin de Bruyne and Yossi Benayoun also in contention, the Italian coach is sure to be faced with the odd selection dilemma during the course of the campaign. Lampard, though, has welcomed the competition, and insists he is ready to add to his 374 league appearances for the club.

“I have had a great career here and I wouldn’t want the club to stand still,” he told the official club website. “The club needs to move forward and bringing in quality midfield players is brilliant. Personally, I’ve had a long break this summer. Missing the Euros was disappointing but it gave me the chance to rest and come back with all guns blazing.”