Michael Laudrup is refusing to comment on the latest round of speculation concerning Swansea City, who have been linked with at least two players this week. 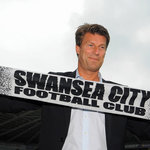 The Danish legend was installed as Brendan Rodgers’ successor at the Liberty Stadium earlier this summer, after the Northern Irishman left for Liverpool. And the former Mallorca coach will be looking to build on the previous good work of his predecessor, who led the Swans to an 11th place finish in the Premier League last term.

Laudrup has used his knowledge of Spanish football to his advantage this summer, most notably in signing Michu from Rayo Vallecano for just £2million. The 26-year-old has been drafted in to compensate for the loss of Gylfi Sigurdsson, who impressed on loan last season but has since joined Tottenham Hotspur from Hoffenheim on a permanent deal.

Defender Jose Manuel Flores, known as Chico, played for Laudrup at Mallorca last season, and the former Spain Under-21 international, 25, has been snapped up for £2million. The third new addition to the squad is 24-year-old Dutch midfielder Jonathan de Guzman, who has joined from Villarreal in what is an initial loan move.

Swansea are expected to make more signings before they begin their campaign with a trip to Queens Park Rangers in just ten days time, and have this week been linked with a move for Mark Davies. The 24-year-old has been tipped to leave Bolton Wanderers this summer following their relegation from the Premier League, and Sky Sports claim an offer of £5million for the midfielder has been rejected by the Lancastrians.

Former Manchester United winger Gabriel Obertan, 23, has also been linked with the Welsh side, despite only joining Newcastle United 12 months ago. The Frenchman, from whom so much was expected in his homeland as he progressed from the Under-16 national side all the way through to Under-21 level, made 23 appearances last season.

However, Laudrup is keeping his cards close to his chest when it comes to the subject of potential signings, and is refusing to confirm the names of those players who make up his shortlist of targets ahead of the 31 August transfer deadline.

“Speculation about players coming in, I don’t want to comment on that,” he said. “It is better for me to say I don’t comment on rumours, I can comment on things about our players as it is different. When something is near or is done then you can ask me.”

On the subject of his own players, Scott Sinclair, the former Chelsea youngster, is now in the final 12 months of his contract. The 23-year-old, who has been on Olympic duty with Great Britain this summer, has been linked with a shock move to champions Manchester City, but Laudrup expects the forward to stay at the Liberty Stadium.

“I think he is very happy here,” the 48-year-old told Sky Sports. “He knows he is important. It is always nice when the bigger clubs have an interest but you have to look at the other players that are playing in the same position at the bigger clubs. I think he will stay here.”