Bayer Leverkusen continue to insist Andre Schurrle is not for sale, amidst speculation Chelsea are lining up a fresh bid for his signature. 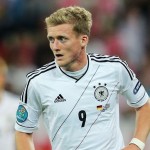 Roberto Di Matteo has spent heavily on his midfield this summer, with Lille’s Eden Hazard, Internacional ace Oscar and Werder Bremen’s Marko Marin brought in for a combined fee of £64million. The Italian coach has now turned his attention to his attacking options, with the transfer window due to close in just nine days’ time.

With Salomon Kalou and, of far greater importance, Didier Drogba leaving in recent weeks, Di Matteo has just Fernando Torres and Daniel Sturridge to count upon as he looks to improve on the disappointing sixth place finish of last term. The Blues began their campaign with a 2-0 win at Wigan Athletic on Sunday, but the goals came from fullback Branislav Ivanovic and midfielder Frank Lampard, who converted a penalty.

Whilst Torres has been told he will have a more significant role to play following the departure of the talismanic Drogba, there is no hiding the fact that a return of just seven goals in 47 league appearances is cause for concern. Sturridge, an unused substitute at the DW Stadium, is in the final 12 months of his contract, and is thought to be considering his future at the Stamford Bridge club.

A number of strikers have been linked with the Blues since the departure of Drogba, including Napoli’s Uruguayan ace Edinson Cavani, and Athletic Bilbao star Fernando Llorente, who is an international team-mate of Torres and Juan Mata. Di Matteo, though, appears to be fixed on Schurrle, one of the most exciting talents in Europe.

Still only 21, the German only joined Bayer Leverkusen from Mainz last summer, when he agreed a five-year contract. Although he ended the season with just seven league goals to his name, this is largely due to his deployment on the flank rather than his favoured central role, from where he scored 20 goals in 66 appearances for his previous club. On the international stage, he has an impressive rate of seven strikes in 17 caps, and was part of Joachim Low’s Euro 2012 squad.

Chelsea have already reportedly failed with one offer of Schurrle, believed to have been in the region of £16million, but it has been suggested Di Matteo will make another attempt to land him before next week’s deadline. Bayer, though, insist they have no interest in letting their number nine leave the BayArena.

“Andre Schurrle is an important player of our club,” Wolfgang Holzhauser, the chief executive of the Bundesliga club, told Bild.  “There is no asking price in this case as there is no alternative solution. We have already said everything about this.”

If Di Matteo is forced to abandon his quest to sign Schurrle, he may increase his interest in Cavani, although the 25-year-old would almost certainly cost more than the German. Llorente, meanwhile, would perhaps be the more affordable option, as the 27-year-old is in the final year of his Athletic Bilbao agreement.