Andre Villas-Boas accepts Luka Modric may leave Tottenham Hotspur this summer, but there is little chance of Rafael van der Vaart being sold.

Croatian international Modric is keen to quit the White Hart Lane club ahead of the new season, with Real Madrid hopeful of concluding a transfer within the next 48 hours. This will be a blow to the London club and their new boss Villas-Boas, who was keen to sign the playmaker whilst in charge of Chelsea last summer.

There has also been speculation linking van der Vaart with a return to Hamburg, a club in which he spent three years from 2005 to 2008 before sealing a transfer to Real. However, with one of his star players heading for the exit door, the new Tottenham coach is reluctant to see the Holland international following suit. 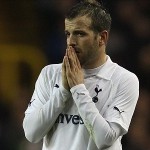 “With Van der Vaart, at the moment I am absolutely counting on him,” he said. “It is a totally different situation from Luka, who has been chased by different clubs in the past two seasons and is continuing to drag interest. We have to make sure the club’s interests are met, and it is up to the chairman to decide that.”

Van der Vaart, who arrived at Spurs from Real in an £8million deal on deadline day in August 2010, has played 61 times in the Premier League, and has chipped in with 24 goals. The 29-year-old has two years remaining on his contract at the capital club, and is likely to play a key role as Villas-Boas looks to challenge for at least a top-four finish next season.