Romelu Lukaku claims Anderlecht are interested in taking him back on loan next season, twelve months after they sold him to Chelsea in a big-money transfer. 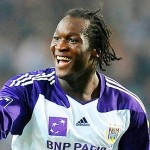 The 18-year-old formed part of Andre Villas-Boas’ rebuilding plans at Stamford Bridge during the summer, when the Blues sanctioned an initial £13million deal to take him from the Constant Vanden Stock Stadium. However, just like his Portuguese coach, the teenager has endured a difficult debut campaign in England.

Lukaku has yet to start a Premier League match for the Londoners, and his six appearances from the bench equate to just 121 minutes on the pitch. He did start three times in the Carling Cup and has also featured once in the FA Cup, but his only goals this season have come whilst still wearing the colours of Anderlecht in late summer.

The striker at least doesn’t have to worry about earning a place in the Belgium side for Euro 2012 due to their non-qualification, though he admits a lack of first team action could eventually hinder his international position. And for this reason Lukaku would consider a loan away from Chelsea next season, and he claims his former club could be interested.

“It is said that the clubs are lining up to loan me and that is true,” he told Voetbal International. “I even heard that Anderlecht want me back. I want to be number one for Belgium, but our other strikers are not standing still. Something has to change.”

In his previous spell with Les Mauves et Blancs, Lukaku scored 28 goals in 54 league appearances, helping them to the domestic title in 2010.