Roma are confident of keeping hold of Daniele De Rossi, despite the continuing interest mega-rich Manchester City have in the player. 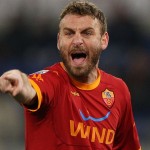 The Italian international has long been linked with a move to the Etihad Stadium, virtually ever since his compatriot Roberto Mancini succeeded Mark Hughes in December 2009. And despite the recent £12million acquisition of Everton’s Jack Rodwell, the 29-year-old still features heavily in the mind of the Blues coach.

Reports last week claimed De Rossi had actually agreed personal terms over a move to the Premier League champions, although this remains unconfirmed. But if this was the case, then all that would remain is for a fee to be agreed with the Giallorossi for their midfielder, who signed a new long-term deal with the club in February.

Born in the Italian capital, De Rossi has spent his entire career to date at his hometown club, despite being linked with the likes of Manchester United and Real Madrid in the past. His loyalty has to be commended, but he must also feel that had he made such a move, his trophy cabinet would be a lot healthier than its current state of two Coppa Italia’s and one Italian Super Cup.

A move to City would likely give him the platform to compete for more silverware, with Mancini’s side fancied to retain their Premier League title and also to make a telling bid for the UEFA Champions League. However, Zdenek Zeman is convinced the potential to win honours with his beloved Roma will ultimately result in Captain Futuro refuse the riches on offer in Manchester.

“I am convinced that De Rossi stays with us,” said the coach. “He is very important for us and the club has not asked me anything about him. I think he will remain. Has Roberto Mancini have ever called me? Several times, even when I was at Pescara last year. The last time I heard from him was three weeks ago.”

Mancini has been largely frustrated by City’s lack of transfer activity this summer, with Rodwell being the only addition to the squad which won the title in such dramatic fashion last season. Other players of interest, such as Robin van Persie and Thiago Silva, have left their clubs for Manchester United and Paris St Germain respectively, merely adding to the woes of the former Internazionale coach.

However, should he be able to lure De Rossi, this would more than make up for missing out on other targets. The Roma player is set to announce his intentions in a press conference on Tuesday, which will either put an end to Mancini’s interest once and for all or see another world class talent heading to the Etihad Stadium.