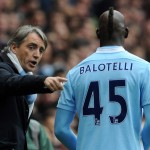 The Italian international helped the Blues win a first league title since 1968 last season, scoring 13 goals in 23 Premier League appearances. However, the 22-year-old also had his controversial moments, including picking up red cards in the draw at Liverpool in November and, perhaps more memorably, at Arsenal towards the end of the season.

That defeat at the Emirates Stadium appeared particularly damaging at the time, as it allowed rivals Manchester United to gain an eight-point lead at the head of the table. Mancini then suggested the 21-year-old wouldn’t feature in any of their remaining six matches, but he did return on the final day of the season, when he more than made amends for his enforced absence by teeing up Sergio Aguero for that famous winning goal.

Balotelli was named in Cesar Prandelli’s squad for Euro 2012, during which he announced himself as one of the most exciting strikers around. The former Internazionale ace scored three goals in Poland and Ukraine, including a brace against Germany in the semi-final. And although the Azzurri were crushed by Spain in the final, Mancini hopes the tournament will ultimately aid the development of his compatriot.

“I hope he develops and he had a fantastic Euro 2012,” said Mancini, who also coached the striker at Inter. “It can help him because he may understand that he has all this quality, it’s important for him to improve his behaviour around football. I hope the Euros can help him with that.”

Meanwhile, the City boss has also revealed that there has been plenty of interest in Balotelli during the summer transfer window. Milan, the team the player supports, have been linked on a number of occasions in the past, but Mancini claims there is also interest from other Serie A sides and also in France, which is likely to mean Carlo Ancelotti’s Paris St Germain.

“There were four or five teams. Not just from Italy also from France,” said Mancini. “Many important teams wanted him but he’s a top player and I never thought about saying yes to any of them.”