Alex McLeish can’t help but draw comparisons between his Aston Villa side and the Birmingham City one he suffered relegation with last season. 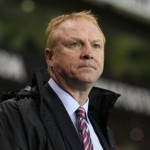 A 1-0 home win against Fulham last month ended a five-match winless streak for Villa, and was thought to have all but assured them of their Premier League status. However, successive defeats to Arsenal and Chelsea, coupled with wins from those immediately around them in the table, leaves them standing just five points above the relegation zone with eight games of their season remaining.

This sinking feeling will be one McLeish can relate to, having failed to keep Birmingham in the top division last season. When they won the Carling Cup final against the Gunners all the talk at St Andrews was of building on this success, yet they lost seven of their last twelve league games – winning just twice – and were relegated on the final day of the campaign when they went down 2-1 at Tottenham Hotspur.

McLeish cited the number of injuries he had to contend with as a major factor in this fall from grace, and this is a situation he feels is repeating on him at Villa. As the season enters its final straight, the Scot has been hit by the absences of Darren Bent, Richard Dunne and Charles N’Zogbia, whilst last week Stiliyan Petrov was ruled out for the foreseeable future when he was sadly diagnosed with acute leukaemia.

“We have been weakened by injuries,” McLeish told the Daily Mirror. “Birmingham were also definitely significantly weakened after winning the cup final, losing about five or six key players. That does make your job much harder without a doubt.”

Villa could face two of their former players, Stewart Downing and Ashley Young, within the next fortnight, when they travel to Liverpool and Manchester United respectively. Losing two of their key players in the summer, as well as Nigel Reo-Coker, Luke Young and Kyle Walker, without properly replacing them, is another reason why McLeish feels his side have been engulfed in a battle to retain their top-flight status.

“I did say at the beginning of the season it wasn’t the greatest experienced squad, though,” he added. “I said it would be a tough challenge for us and a transitional period. It has been proven and we are weaker than the players here last season at this stage. They had Ashley Young, Stewart Downing and Kyle Walker – three terrific players.”

As well as those trips to Anfield and Old Trafford, Villa must also make the short journey to the Hawthorns to take on West Bromwich Albion before the end of the month. Home matches against Sunderland, managed by their former manager Martin O’Neill, and top-four chasing Tottenham also present stiff challenges. The crunch could come for McLeish when fellow strugglers Bolton Wanderers visit Villa Park on 24 April, in a fixture which was postponed last month when Fabrice Muamba suffered a cardiac arrest three days earlier.