Samir Nasri faces a no-lose situation regarding his next career move, as he enters the final twelve months of his contract at the Emirates Stadium. 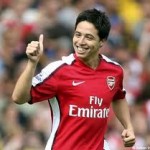 He wouldn’t have agreed at the time, but missing out on the World Cup Finals was a blessing in disguise for Samir Nasri. Raymond Domenech’s snub, which he compared to a slap in the face, seems to have brought the best out of the France international, who has since gone on to captain Les Bleus under the leadership of Laurent Blanc.

His determination to bounce back from his South Africa disappointment has also served Arsenal well.  The midfielder has just completed his third season in English football, yet only in this last campaign has he truly realised his undoubted potential. The Gunners may have endured a sixth successive season without silverware, yet this is of no fault of their number eight, whose performances heralded ten goals from 30 outings and nominations for the PFA Player of the Year awards in both the senior and junior categories.

This is the type of form Arsene Wenger expected when he forked out £12million to land Nasri in the summer of 2008, four years after he first became aware of the player having seen him shine at the European Under-17 Championships (a tournament in which, incidentally, a certain Cesc Fabregas of Spain was voted best player). The Marseille youngster penned a four-year deal in the English capital, a contract which is now twelve months short of its expiration.

Nasri could yet sign a new contract and remain at the Emirates Stadium. If he refuses to do so, though, Wenger will likely look to offload him abroad rather than entertain the idea of selling him to Manchester United (“one thing’s for sure,” he told RTL earlier this month, “we’re not selling him to Manchester United”). But, if the latter is an option the player wants to explore, he can merely sit tight for twelve months and head to Old Trafford next summer.

Ultimately, Nasri holds all the aces as he considers his three options: agree an improved deal and stay where he is; head overseas for a fresh challenge in Italy or Spain; or wait until next year and take the pick of a lucrative Bosman free transfer. This is not the first time such player power has been exemplified, and it further demonstrates the need for clubs to tie down key players not twelve months before expiry dates, but two years.

There is an argument that Nasri had hardly set the Premier League alight before last season, so there was no pressing need for Wenger to hand him fresh terms twelve months ago. But even though his stock is much higher now, he was still a key member of the first team squad, and the speculation surrounding Fabregas’ future should have been taken into consideration. Had they done so, they would not face the prospect of letting him leave for a cut-price fee now or in January, or seeing one of their prized assets join a rival club for nothing next summer.