Alan Pardew insists he is not desperate to add to his squad at Newcastle United, despite signing just three youngsters since the end of last season. 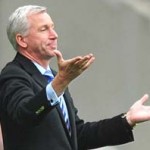 The Magpies were the surprise package of the Premier League last term, finishing in fifth position after challenging for a UEFA Champions League place for much of the campaign. With Chelsea and Liverpool unlikely to be as substandard again, it would be something of an achievement if Pardew’s side can repeat this placing at the end of the new season.

So far, Newcastle have managed to add just three players to their roster during the summer window. Frenchman Romain Amalfitano, 22, was signed on a free transfer following the expiry of his Reims contract, and he has been joined by a second midfield player, Burundian teenager Gael Bigirimana, who arrives from Coventry City. Another teenager, defender Curtis Good, has been signed from Australian side Melbourne Heart.

These three signings will be seen as part of Pardew’s future plans at St James Park, yet are unlikely to be key in their quest to build on last season’s performance. The United manager, though, claims that he would be happy to go into the campaign with his existing options, although he still has targets ahead of the 31 August deadline.

“I don’t know if not signing anyone is bad news,” he told the Sunday Sun. “I would say that bad news is losing a player, especially one of our top players and I do believe we are pretty strong in terms of that not happening. We are in a situation wherein we can hold off any offers that come our way.

“I do need a couple of players, maybe three. However, I am very comfortable about going into our first game without any. If, to get a deal done, we need to show patience then that’s what we will do. It’s better to be patient with the ones that you want, rather than going down the list a little bit.”

An offer to take Andy Carroll back from Liverpool in a loan deal has been rejected, with the Reds thought to be holding out to recoup at least £17million of the £35million they paid for the striker in January 2011. Two bids for France international fullback Mathieu Debuchy have been snubbed by Lille, but a third and final approach is expected to be made shortly. Ajax midfielder Vurnon Anita, a Holland international, has also been linked, as has Twente defender Douglas and, before his move to Borussia Monchengladbach, his team-mate Luuk de Jong.