With the new season already upon us this weekend, takefootball predicts how the coming nine months will pan out in the Premier League. 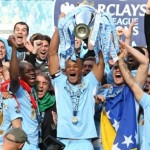 It has been a frustrating summer so far for Roberto Mancini, with just Jack Rodwell added to his Manchester City squad. However, with the likes of Sergio Aguero, David Silva and Yaya Toure ready to go again, the Italian coach still has some of the best talent in Europe available at his disposal, and it would be surprising if he doesn’t splash more cash before the window slams shut on August 31.

The Blues were the best team in the country last season, despite the slenderness of their title success. They will start the new campaign as favourites to win the title again, and gave the nation a reminder of their class with a 3-2 win over Chelsea in the FA Community Shield last week. Will this honour be the only one to be celebrated in the blue half of Manchester this season, or is it simply the beginning of more success?

The biggest challenge to the Etihad Stadium club will come from rivals Manchester United, who have made two excellent acquisitions this summer in Robin van Persie and Shinji Kagawa. Last season only goal difference prevented the Reds from winning title number 20, although in reality they often struggled to reach the heights of their noisy neighbours, particularly in the two derby matches.

Like City, United look awesome going forward, and with goalkeeper David De Gea now fully equipped for the Premier League after his debut season, Nemanja Vidic returning to fitness to steady the back four, Antonio Valencia fit from the start of the season and the additions of Kagawa and van Persie, not to mention the presence of Wayne Rooney, Sir Alex Ferguson may well be popping the champagne corks once again in May.

The battle for the top four

The loss of Robin van Persie will hit Arsenal hard, regardless of the arrivals of Lukas Podolski, Olivier Giroud and Santi Cazorla. Arsene Wenger still has plenty of quality in his ranks to be competing for a top-four finish, and he is still sitting on the £20million received from the sale of his Dutch talisman. If he can add a top-quality midfielder to his team, especially as Alex Song appears to be Barcelona-bound, then there is no reason why they can’t go on to enjoy a successful campaign.

Chelsea have spent heavily on Eden Hazard, Oscar and Marko Marin, but the departure of Didier Drogba cannot be underestimated. The Ivorian has been the face of the Blues for the best part of a decade, and his presence will be sorely missed. The onus is now very much on Fernando Torres, and the Spaniard knows he has no more excuses: now is the time for him to deliver.

Leading Tottenham Hotspur to fourth place last term wasn’t enough to save Harry Redknapp from the sack, but an identical finish this time round would be deemed a huge success for Andre Villas-Boas. Like their two capital rivals, they are also likely to lose their key man, with Luka Modric set for Real Madrid. Jan Vertonghen and Gylfi Sigurdsson look shrewd buys, but it is vital they sign another striker, and if they do that, the White Hart Lane club will definitely be in contention for one of the top-four berths.

Newcastle United were the surprise package last season with their fifth-place finish, but can Alan Pardew lead take them one further? Keeping hold of his star players was always the most important thing for the Magpies boss this summer, with speculation linking the likes of Demba Ba, Papiss Cisse and Yohan Cabaye with moves. Vurnon Anita, at almost £7million from Ajax, is their biggest signing of pre-season so far, but they may need more if they are to improve on last term.

Liverpool never looked likely to qualify for the Champions League under Kenny Dalglish, which resulted in the Scotsman being axed at the end of the season. Brendan Rodgers’ priority in his debut campaign is to improve on last term’s eighth-place finish, and he hopes to have boosted his chances with the signing of his Swansea City midfielder Joe Allen and Italian striker Fabio Borini, who he has also worked with in the past. But the top-six is probably the best they can hope for.

Everton finished ahead of their rivals last season, and they would love to repeat that again. Tim Cahill and Jack Rodwell have departed Goodison Park, but David Moyes has cash to spend following the sale of the latter to City, whilst Steven Pienaar has made his return permanent and Steven Naismith adds to the attacking options. More signings are expected before the 31 August deadline, but the Toffees will need to get off to a rare good start to compete for the top-six.

Aston Villa were in freefall after Darren Bent was ruled out with injury in February, and it is vital the England international stays fit this season: only Stoke City scored fewer than the Midlands giants last term. And whilst they surely can’t be as bad as last season, they have so far failed to find a Plan B should their star man once more come unavailable for any length of time. At least Paul Lambert has the fans onside from day one, something which was never afforded to Alex McLeish.

The reason Lambert was approached by Villa was due to his good work at Norwich City, and he has certainly left the Canaries in a healthy state for Chris Hughton. The former Newcastle boss has made some impressive signings this summer, with Robert Snodgrass and Michael Turner the standout additions. It should be another relatively comfortable campaign for the Carrow Road faithful.

Martin Jol made a slow start to life at Fulham last season, before leading them to a ninth-place finish. Clint Dempsey, though, looks destined to quit this month, and another big presence in Danny Murphy has already left. Pavel Pogrebnyak, who impressed during a loan spell last term, is no longer there, so much will be asked of new strike duo Mladen Petric and Hugo Rodallega.

Sam Allardyce wasted no time in leading West Ham United back into the top-flight, and you get the impression that merely avoiding relegation is not enough for the Upton Park faithful. Fortunately for them, they have a manager with bags of experience, and with the additions of Jussi Jaaskelainen, Alou Diarra, Modibo Maiga and Mohamed Diame, they should be good enough to avoid a struggle.

Across London at Loftus Road, Mark Hughes assured Queens Park Rangers fans they will never experience a repeat of last season’s flirtation with relegation as long as he is in charge. The Welshman has added much experience to his squad in the likes of Ji-Sung Park, Andy Johnson, Robert Green and Ryan Nelsen, whilst he beat off much competition for Blackburn Rovers youngster Junior Hoilett. They should have enough to survive, but it probably won’t be as comfortable as perhaps Hughes envisages.

Martin O’Neill made a big impact when succeeding Steve Bruce at Sunderland last season, but it has been a difficult summer with just Carlos Cuellar and Louis Saha being snapped up. The Ulsterman has too much cunning to be dragged into a relegation fight, but unless there are more new faces before the end of the month, it’s unlikely to be a season to remember at the Stadium of Light.

The fight against relegation

Reading are back in the Premier League after winning the Championship last season, and Brian McDermott has made a number of additions, the most notable being Pavel Pogrebnyak, Danny Guthrie, and Adrian Mariappa. Garath McCleary could also be a good signing after an impressive campaign at Nottingham Forest. Like most newly promoted clubs, 17th place would be warmly welcomed at the Madejski Stadium…

…so the same applies for Southampton. At the time of writing, the Saints are closing on Bologna’s Gaston Ramirez, which would be a remarkable capture considering he has in the past been linked with Liverpool, Tottenham Hotspur and Juventus. The addition of Nathaniel Clyne from Crystal Palace is also a coup, whilst Steven Davis will add experience to Nigel Adkins’ midfield. It will be interesting to see how Jay Rodriguez fares, with his £6million price tag considered too high by most pundits.

Swansea City impressed during their debut campaign in the Premier League, but have been dealt a blow with the departures of manager Brendan Rodgers and midfielder Joe Allen, both of whom have joined Liverpool. With Scott Sinclair also tipped to move on before the end of the month, these are testing times at the Liberty Stadium. The appointment of Michael Laudrup is an intriguing one, and the Dane will be hoping new signings Michu, Jose Manuel Flores, and Jonathan de Guzman can quickly settle to life in England.

Stoke City have become part of the furniture in the Premier League since their promotion in 2008…but this could be their most difficult campaign yet. Tony Pulis’ side were the lowest scorers in the entire division last season, and that includes the three relegated teams – and the signings of Michael Kightly, Jamie Ness, Goran Popov and Geoff Cameron would hardly suggest this problem has been solved. The Potters need to sign at least another striker, possibly even two, as they can’t rely on their defence keeping them away from danger forever.

Roberto Martinez performed a miracle last season in keeping Wigan Athletic up thanks to an unbelievable run of seven wins from nine, including triumphs over Manchester United, Arsenal, Liverpool and Newcastle United. The Spaniard has again resisted exploring his options in favour of remaining loyal to the Latics, and has added Arouna Kone, Ivan Ramis and Fraser Fyvie to his squad, whilst Ryo Miyaichi arrives from the Gunners on loan. Ivorian Kone will make up for the loss of Hugo Rodallega, but can Martinez keep on performing miracles?

With Roy Hodgson succeeding Fabio Capello as England coach, West Bromwich Albion have decided to give Steve Clarke his first managerial position following his successful assistant roles at Chelsea, Newcastle and Liverpool. But is the Scot up to the job? The permanent signing of Ben Foster is an important one, and hopefully Romelu Lukaku will be given plenty of first team chances following his loan arrival from Chelsea. But it could be a very difficult season for the Baggies.