Brendan Rodgers would love to return Liverpool to the top four this season, but he is realistic enough to accept the competition is fiercer than ever. 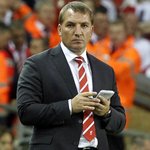 Not since Rafael Benitez rivalled Manchester United for the league title in 2009 have the Anfield club finished in the top four of the top-flight. On that occasion, the Reds ended up in second place and just four points behind Sir Alex Ferguson’s men, yet that must already seem a lifetime ago for the supporters of the Merseyside club.

In the subsequent years they have finished seventh, sixth, and last season, eighth, which is their lowest in the Premier League since 1994. Following Benitez’s departure just 12 months after almost winning a first championship since 1990, Roy Hodgson and Kenny Dalglish have tried and failed to get them back on track, and now Rodgers has his chance.

Despite impressing at Swansea City over the past two years, there are still some who feel the Northern Irishman is not up to the job of managing one of the biggest clubs in Europe. The Liverpool faithful will give him their full support, of course, and they should also be reasonable enough to accept their previous high standards may have to be reviewed.

Not even the most optimistic of fans would ask them to challenge for the title, and few would even expect them to quality for the UEFA Champions League. So what would represent a good campaign? A repeat of their exploits in the cup competitions last season – they won the League Cup and reached the FA Cup final – would help the new manager, and there is also the UEFA Europa League to contend with, a competition Liverpool won three times in its previous guise as the Uefa Cup.

But it is the Premier League in which they will ultimately be measured against. Forget the fact he is in his debut season at the club, an improvement on last term’s eighth finish is a must for Rodgers; an identical finish would indicate a lack of progress, and anything below would simply be deemed unacceptable.

Rodgers is no fool, and he knows you don’t usually get offered a job like Liverpool unless there are problems. The 39-year-old is also aware that expectations are always high regardless of recent disappointments, but he is also realistic enough not to heighten these further, especially in an increasingly competitive Premier League.

“The challenge at the top of the table is greater than ever,” he told the official club site. “It was the top two, the top three, then the top four. Now there are seven or eight teams involved in that. The top four is certainly not something we’ll shy away from. It’s where a club of this status wants to be, but it’s always easier said than done.”

Rodgers has raided his former club for midfielder Joe Allen, who cost £15million, and has also poached Fabio Borini from Roma in a £10million deal. The Reds manager worked with the Italian striker when he was on Jose Mourinho’s backroom staff at Chelsea, and again when he took him to Swansea from Stamford Bridge in a loan move. Joe Cole, who spent last season at Lille, has also been invited back into the first team squad.

He has hinted of more arrivals before the 31 August deadline, but he may have to raise cash by offloading from his existing options. Defender Daniel Agger has been the subject of two failed bids from Manchester City, but there is room for negotiation. And Andy Carroll could also be sold, just 18 months after his club record £35million arrival from Newcastle United.