Eden Hazard made his competitive debut for Chelsea on Sunday afternoon, and although he tasted defeat at Villa Park, overall he enjoyed his welcome to English football. 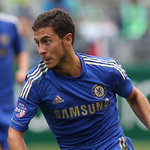 Of all the transfers which have been made this summer so far, the Blues’ £32million acquisition of the Belgian is seen by many as the most exciting. Still only 21, the former Lille man had been chased by a host of clubs over the past couple of years, but he opted to join the reigning European champions after committing to a five-year contract in June.

Hazard was involved as his new side were defeated 3-2 in a feisty Community Shield clash at the weekend, a match which saw Branislav Ivanovic sent off and a further eight players shown yellow cards by Kevin Friend. But despite this loss to Manchester City, the midfielder claims to have enjoyed his afternoon in the Midlands, as he soaked up the atmosphere of the traditional curtain-raiser.

“I’ve already found what I came for in England – beautiful stadium, beautiful pitch and big atmosphere,” he told L’Equipe. “Beyond the result, I am happy with that first test. I felt at ease. We still have to sort out some details in attack but it will come. I am confident. I have adapted quickly.”

Roberto Di Matteo has spent heavily on his midfield since the end of last season, with Oscar arriving from Internacional for £25milllion and Marko Marin from Werder Bremen for £7million. With the likes of Frank Lampard, Ramires, Michael Essien, John Obi Mikel and Raul Meireles also hunting a regular place in the starting eleven, Hazard will be lucky to repeat his appearance record of the past three seasons, during which he missed only one league match for his previous club.

Clearly, playing so many games is something the double Ligue 1 Player of the Year is accustomed to, and he is prepared to fight for his right to secure a regular berth for the FA Cup winners. Indeed, such is his desperation to make his mark in the Premier League, he has revealed that he would be happy to play in any position, including at left fullback.

“Playing playmaker or not? I have just arrived and the only important thing to me is to play – in any position,” he added. “I would be even keen to play at left-back. There are a lot of talented players in that team. There is competition – it is the highest level.”

Despite his obvious talent, it is unlikely Hazard will force Ashley Cole out of the line-up. However, it could be a different story if he asks to try his hand at right fullback instead. Joking aside, this is fast becoming a major problem position for Di Matteo. Jose Bosingwa left the club during the summer when his contract expired, meaning the ageing Paulo Ferreira is the only specialised right back in the current squad, as both David Luiz and Ivanovic are more comfortable in the heart of the back four.

Mathieu Debuchy, the France international, has been linked with a move to Stamford Bridge, but after Newcastle United’s botched attempts to sign him since Euro 2012, Lille now insist the 27-year-old is no longer on the market. A more likely option could be Spaniard Cesar Azpilicueta, 22, who helped Marseille to a clean sheet as they opened their campaign with a 1-0 win at Reims on Sunday.