Southampton’s proposed signing of Gaston Ramirez has been placed in doubt, after Bologna revealed they will not let the forward leave for less than €20million. 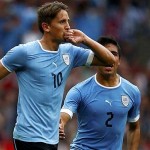 The Uruguayan international has this summer been linked with Liverpool and Tottenham Hotspur, whilst Serie A champions Juventus have also been credited with an interest. So it was something of a surprise to learn on Friday that the Saints, recently promoted to the Premier League, had won the race to sign the 21-year-old.

It had been reported that the St Mary’s club had been successful with an offer of almost £12million, which would see them smash their transfer record for the second time in recent weeks following the acquisition of Burnley’s Jay Rodriguez for £6million. As far as statements of intent go, then this is a huge one.

Ramirez told Corriere dello Sport of his excitement over making a move to the Premier League, being honest enough to admit the cash on offer is too tempting to refuse. He also claimed that an agreement had been reached between the two clubs, and spoke of his belief that Southampton can become a big club in the coming years.

Nigel Adkins, though, urged caution when talking about the transfer. Whilst hailing the ambition of chairman Nicola Cortese, the Saints manager was also quick to point out that until Ramirez had put his signature to a contract, he was refusing to take anything for granted. And as it turns out, his words appear to be wise.

Bologna president Albano Guaraldi has now hit back at the comments made by the player, and insists he will not let him leave the Stadio Renato Dall’Ara unless an offer of €20million (£15.8million) is received, a figure which falls short of what the Saints have bid.

“The offer we received has not been considered suitable,” Guaraldi told Sky Italia. “His agent has already reached an agreement with the English club, but we haven’t. Now the situation is static, we made our demands and will see what happens. I don’t understand why Gaston said those things. I won’t even get into the behaviour of his agent.

“I have always been clear: I’d let him go only for a suitable offer, which so far has not arrived. I maintained my consistency and refused the bid. I am irritated because one of my players spoke as if he were already at another club, when there still isn’t any agreement. I can understand his desire to make the move, but I do not share his timing and methods.”

Southampton must now decide whether to meet the price being asked of the Italians, or turn their attentions to other targets. So far this summer, Akins has signed Rodriguez, Nathaniel Clyne, Steven Davis, and Paulo Gazzaniga. The Saints begin their season with a daunting trip to the Etihad Stadium to face champions Manchester City.