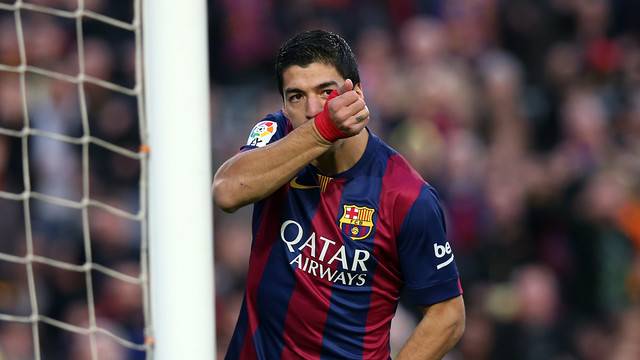 He may have made a less than spectacular start to life in Spain, but Luis Suarez is beginning to prove he is worth the £75million Barcelona paid for him.

After firing Liverpool to the verge of a first league title in over 20 years last season, the Uruguay international quit England for the Camp Nou ahead of the current season. But due to a suspension for biting Italy’s Giorgio Chiellini at the World Cup Finals, the forward made a delayed start to his La Liga career and only made his debut in October.

Playing in a trio alongside Lionel Messi and Neymar, Suarez was expected to form part of the best attacking force in the land. But the 28-year-old’s first appearance ended in a 3-1 defeat at rivals Real Madrid, and it took him eight league games to open his account when he scored the second goal in a 5-0 home triumph over bottom-placed Cordoba in December.

The former Ajax star has slowly been improving in recent weeks, and whilst he has yet to reach the level which earned him the PFA Player of the Year and Football Writers Footballer of the Year awards in England last season, he now has 14 goal in 29 appearances in all competitions, including a brace at Manchester City in the UEFA Champions League last month.

If those goals – which helped secure a 3-1 aggregate win and a quarter-final date with Paris Saint Germain – were crucial for Barca, so too was his winning goal which wrapped up a 2-1 win against Real on Sunday evening. This win extends Barca’s advantage over Los Blancos at the head of the table to four points, and he has earned the praise of the head coach.

“We are very happy that he is a being decisive player for us and we are very happy with his attitude and what he brings to this team,” said Luis Enrique. “He brings a lot to the team he is not just a classic centre forward, he also links up with his team-mates. He’s a player that marvellously compliments the squad we have, and that’s why we signed him.”

During his time on Merseyside Suarez, who scored 82 goals in 133 matches for the Reds, had only a League Cup to show for his efforts. But with Barca on course to win a 23rd league title, a place in the last eight of the Champions League and also a Copa del Rey final on the horizon, he is likely to add to his honours list in the coming weeks.