Andre Villas-Boas insists Jermain Defoe remains part of his plans at Tottenham Hotspur, whilst Luka Modric is thought to be on the verge of joining Real Madrid. 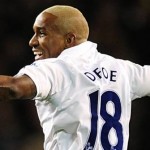 Defoe scored 11 goals in 25 Premier League outings last season, yet the 29-year-old was named in the starting line-up just 11 times by Harry Redknapp. This led to the former West Ham United and Portsmouth star revealing that he is prepared to consider his future at White Hart Lane if he continues to be overlooked by the capital club.

A number of clubs, including Sunderland, have been linked with Defoe, who gave a reminder of his quality on Wednesday night with the winning goal for England in the 2-1 friendly win over Italy. However, new Spurs coach Villas-Boas has revealed he has held talks with the striker and his agent, and he expects him to form part of his plans for the coming season.

“I have spoken to Jermain and his agent about the situation,” said the Portuguese. “The talks were positive. He was a key player last season and will continue to be. That’s the expectancy I have with regards to his future. Competition is something that he is used to. The goal he scored [against Italy] shows he can make the difference. He is tremendous. He has great technical ability.”

Meanwhile, Tottenham still hope to sign Emmanuel Adebayor on a permanent basis before the end of the month. The Togolese enjoyed a fine spell at the club last season, but negotiations over his permanent release from Manchester City are proving trickier than initially envisaged. Joao Moutinho, the Portugal international midfielder, is another target, and Villas-Boas hopes to raid his former club Porto to take the 25-year-old for a fee of around £20million.

One player who is unlikely to feature for Spurs again is Modric. The Croatian international spent much of last summer trying to engineer a move to Chelsea, but this year he has set his heart on a move to Jose Mourinho’s Real Madrid. It has been reported that the playmaker is undergoing a medical with the Spanish giants, after the two clubs reached an agreement over his transfer.