Fernando Llorente could be plying his trade in the Premier League this season, after his agent revealed two clubs are keen on his signature. 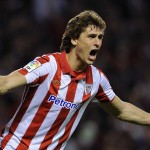 The Spanish international has established himself as one of the best forwards in Europe, having scored 72 goals in La Liga during the past five years. However, after rejecting the offer of a new deal at Athletic Bilbao, he was left out of their plans for the stunning 5-3 defeat to Real Betis on Sunday amidst speculation over his future.

Llorente is in the final 12 months of his contract at the Basque club, who are reluctantly set to cash in this summer rather than lose him for nothing next year. Juventus, the Italian champions, remain favourites to sign the 27-year-old, but his agent has revealed there is every possibility he will move to England instead.

“Tomorrow [Wednesday] Llorente will speak to his destination,” Carlos Arino Bajo told the Daily Telegraph. “It is very, very possible he will decide to go to the Premier League. I don’t know the [choice of] club at the moment but there are two [interested] clubs. One is in London, and one is in Manchester.”

Standing at 6ft 5in, Llorente would certainly make a nuisance of himself in the Premier League. Taking into account the comments of his agent, takefootball considers the options the striker may have before the 31 August deadline.

Roberto Mancini has let Emmanuel Adebayor return to Tottenham Hotspur, and if speculation that he is also prepared to sell Edin Dzeko has substance, he would almost certainly be in the market for more firepower. And with Sergio Aguero picking up a knee injury in the 3-2 win over Southampton on Sunday, the need for a new striker could be of utmost importance to the champions as they look to retain their crown.

Llorente was a constant menace as Athletic knocked the Reds out of the UEFA Europa League last season, and there is no doubt that Sir Alex Ferguson is a fan. But following the £20million acquisition of Robin van Persie from Arsenal last week, there is no place for yet another striker at Old Trafford.

Arsene Wenger pre-empted the sale of van Persie by signing Lukas Podolski and Olivier Giroud for a combined £25million earlier this summer. But with only the latter expected to play as an out-and-out striker, there is still room for reinforcements in the Gunners squad. Llorente is a signing which could make all the difference at the Emirates Stadium club.

Roberto Di Matteo has spent heavily on his midfield this summer, but there is still a need to replace the legendary Didier Drogba in their attack. As it stands, the Blues are over-reliant on Fernando Torres, which is hardly a good idea considering his goalscoring record of late, with Daniel Sturridge acting as back-up. Not many players have the physical presence of their famous Ivorian, but Llorente certainly does.

If any of the leading clubs in the Premier League are in need of a new attacker, it is perhaps Tottenham. Even though Adebayor has returned to White Hart Lane, Andre Villas-Boas only has him, Jermain Defoe and Harry Kane as recognised strikers. Llorente would relish the service provided on the flanks from Gareth Bale and Aaron Lennon, and could help push Spurs onto the next level.