Emile Heskey is training with his former club Wigan Athletic, but Roberto Martinez insists the forward will not be offered a playing contract. 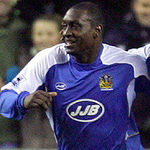 The former England international made a big impression at the DW Stadium during a three-year stint, which ended when he transferred to Aston Villa in 2009. His contract at the Midlands club expired at the end of last season, and he has since been on the lookout for a new employer ahead of the new campaign.

In the meantime, Heskey has been welcomed back to Wigan where he is helping out the younger players whilst keeping himself fit. This has inevitably led to suggestions the 34-year-old could be offered the chance to earn a playing deal with the Lancashire side, but Martinez has ruled out such a possibility.

“Emile has had a tremendous history with Wigan,” he said. “But I don’t think there will be any more pages to be written in that particular book. Emile asked to come in to keep himself fit, and we’ve all obviously got some great memories of his time with Wigan Athletic. He is always welcome at our football club.

“His presence will be great for the youngsters as part of their learning curve. Any session where you get the opportunity to work with someone like Emile Heskey is something that every one of our players should be taking advantage of. Emile is always welcome at Christopher Park, he can stay for as long as he likes.”

Heskey began his career at Leicester City, earning a reputation as one of the best young talents in the country and prompting Liverpool to fork out £11million for his signature in 2000. After making 150 league outings for the Reds he moved onto Birmingham City for an eventual fee of £4.75million, and from there he joined Wigan for a club record £5.5million in the summer of 2006. His move to Villa three years later took the total amount spent on signing him during his career to £24.75million.

During his spell for the Latics he scored 15 goals in 82 outings, and his contribution of eight goals in his debut campaign was a key factor in avoiding relegation by virtue of goal difference. But with Martinez ruling out the chances of the veteran striker adding to this tally, he must look elsewhere to prolong his playing career.

Steve Bruce, who signed Heskey for Birmingham and also managed him at Wigan, has made no secret of his desire for a reunion at Hull City. The Tigers may yet face competition from Championship rivals Leicester, who have been linked with offering him an emotional return to his hometown club and the team who launched his career in 1994.