Joseph Yobo has completed his transfer to side Fenerbahce, and has thanked Everton for allowing him to make a permanent switch to the Turkish side. 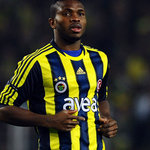 The Nigerian international will go down in the record books as David Moyes’ first ever signing as Toffees manager, when he arrived from Marseille in an initial £1million loan deal back in July 2002. After making 24 Premier League appearances during his debut season, the Merseyside club had no hesitation in paying a further £4million to make the move permanent.

Yobo would go on to make a further 196 league outings for Everton, including an ever-present campaign in 2006-07, and he became the first African to captain the club when he was handed the armband for a UEFA Cup clash against Greek side Larissa in October of that campaign. However, he had slipped down the pecking order behind Sylvain Distin, Johnny Heitinga and Phil Jagielka in recent times.

The 31-year-old defender has spent the past two years on loan at Fenerbahce, appearing 69 times as he helped the Sari Kanaryalar to the Super Lig in 2010-11 and the Turkish Cup last season. He has now completed a permanent move to the Sukru Saracoglu Stadium, having signed a three-year contract after the two clubs agreed on a transfer fee.

“I would love to thank Everton and the management of Fenerbahce for reaching a deal,” Yobo, who still had two years left on his deal at Goodison Park, told the club’s official website. “My family have settled well in Turkey and enjoy the life there, so I’m glad they will be reuniting with friends here.

“The permanent switch is done and I am also switching to help the team do well on the pitch. It’s been a long journey into achieving this dream and now is the time to pay the club and fans back with a great performance.”