Karl-Heinz Rummenigge claims Nigel de Jong’s agent is trying to find a new club for the Holland international, although Bayern Munich will not be making an offer. 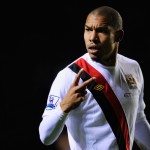 The 27-year-old has been a big success since Mark Hughes signed him for Manchester City in January 2009, for a reported fee of £18million. He helped the Blues end their 35-year wait for a trophy when he started in the 1-0 FA Cup final win over Stoke City in May 2011, and last season he was involved as they won their first league title since 1968.

However, de Jong made just 21 appearances in their Premier League success, of which only 11 came from a starting position. With his contract now in its final 12 months, he has been linked with a move away from the Etihad Stadium during the summer transfer window.

Bayern are just one of several clubs who have been credited with an interest in the former Hamburg man, but Rummenigge has dismissed reports which suggest an offer is being lined up. The Allianz Arena chairman, though, claims that the agent of the player has been busy trying to arrange a move for the midfielder: “We know that De Jong’s agent offers him everywhere,” said the former German international. “But it is not true to say there is interest from FC Bayern.”

De Jong, meanwhile, indicated earlier this year that he would be happy to see out the remaining year of his City contract. As Roberto Mancini’s side look to add to their recent successes, the Dutchman knows these are exciting times for the club, which he is reluctant to miss out on by leaving ahead of the coming campaign.

“My contract runs for another year, so I’m in a pretty good position,” he told Dutch magazine NuSport. “I want to stay. I’ve been at the club for three years and I’m feeling really well. I have won the FA Cup and the league title, which are the biggest trophies in England.”