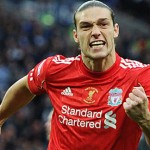 England international Carroll faces an uncertain future this summer, with Brendan Rodgers seemingly willing to let him leave Liverpool after just 18 months. The new Reds boss has little place in his plans for the former Newcastle United striker, who has scored just six goals in 42 Premier League matches since his club record £35million arrival at Anfield.

It has been suggested that Allardyce is prepared to pay a £2million loan fee for the services of the 23-year-old for the coming season, with another £17million to be added to make the deal permanent at the end of the campaign. However, Carroll is understood to be reluctant to make the move to Upton Park, and would prefer a return to St James Park or, failing that, a switch to another club able to offer him European football.

This has come as something of a blow to the Hammers manager, who feels his side would all but guarantee their survival in the Premier League if Carroll would agree to make the move to the East End club. And whilst he is refusing to concede defeat in his pursuit of luring the 6ft 3in hitman, he accepts at the moment he seems unlikely to succeed.

“I would have probably stuck my neck out and said we would almost certainly stay up with him on board,” Allardyce told The People. “We wouldn’t have thought we would have had any chance of signing a player of Andy Carroll’s capabilities but it became clear a couple of weeks ago there was a possibility of a loan. Unfortunately, at this moment, it’s not the case.”

West Ham have been able to add to their attacking options ahead of the new season, with Mali international Modibo Maiga joining from Sochaux in a £5million deal. Elsewhere, goalkeepers Jussi Jaaskelainen and Stephen Henderson have also been added, as have defenders James Collins and George McCartney, whilst midfielder Mohamed Diame has signed following the expiry of his Wigan Athletic contract.