Arsenal have completed the signing of Santi Cazorla from Malaga, and Arsene Wenger has explained what he believes the Spaniard will bring to the party. 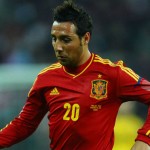 Robin van Persie may feel the Gunners lack the ambition to end their trophy drought, but he would be hard pushed to justify such reasoning after their recent transfer business. Wenger spent a combined fee of around £25million for Lukas Podolski and Olivier Giroud before most Premier League rivals had even drawn up their own shortlist of targets, and now he has made what will probably be his marquee signing of the summer.

After much speculation, Cazorla arrives at the Emirates Stadium from Malaga in an initial £16million deal. The Spanish international only moved to La Rosaleda from Villarreal for a similar fee last summer, and he played a key role as they achieved a club record fourth place finish in La Liga to earn a shot at the UEFA Champions League.

However, they have since fallen on hard times financially, and this has allowed Wenger to take the 27-year-old for what many agree to be a knockdown price. The midfielder was part of Spain’s all-conquering European Championship squads of 2008 and 2012, although he missed out on their World Cup triumph of 2010 due to injury.

Cazorla will now link up with his new team-mates at their pre-season training camp in Germany, and he could feature against Cologne in a friendly on Sunday. Wenger is naturally delighted with his latest addition, and has explained just how he sees the player fitting into his plans at the Emirates Stadium for the new campaign.

“Santi Cazorla is a great signing for us,” he told the official club website.  “He will add significant quality to our squad. He is a versatile, attacking midfield player who can play comfortably on either side of the pitch or centrally. He has good pace, is technically gifted and will be a huge asset to Arsenal Football Club. We are delighted that he is joining us.”

Malaga’s troubles, meanwhile, are unlikely to end here. Jose Salomon Rondon, who had been linked with Tottenham Hotspur in recent weeks, has agreed to join Russian club Rubin Kazan, who will pay around £8million for the Venezuelan forward. Jeremy Toulalan, the France international, has been linked with Newcastle United, and young attacked Isco is believed to be earning the interest of Manchester United.

None of the above, though, is of concern to Cazorla anymore. The midfielder is already looking forward to his new challenge in England, and he aims to help his new club finally add to an honours list which has remained untouched since Patrick Vieira converted a penalty shootout kick to defeat United in the FA Cup final of 2005.

“This is a club with great players, a fantastic stadium and huge support,” said the Spaniard. “The club has one of the best managers in football and their style of play is recognised and admired all over the world. I’m so excited to be joining one of the greatest teams in Europe and also in the Premier League. I will do my best to help Arsenal challenge for trophies and make all the supporters happy.”