Paul Lambert has challenged Brad Guzan to take the Aston Villa goalkeeper jersey from Shay Given, after the USA international rejoined the Midlands club. 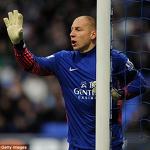 Guzan initially left Villa at the end of his contract earlier this summer, before Lambert arrived from Norwich City as Alex McLeish’s successor. The 27-year-old had spent the previous four years at the club, yet three of these he acted as understudy to compatriot Brad Friedel, before Given was installed as first choice last summer.

Even an impressive seven-match stint last season, when the Irishman was injured, didn’t result in an extended run in the line-up. But after persuading him to return on a three-year contract, the new Villa Park manager has challenged the American to fight for the number one jersey during the forthcoming campaign.

“I’ve watched Brad and some of his games when he was in the team last year and he was excellent,” said Lambert. “I know he’s always had that stigma of being the number two behind some really good goalkeepers here. But when you come back at the start of the season nobody knows what’s going to happen and it depends on whoever does well.

“Brad played very well the time he was in and maybe he found himself a bit unlucky to be back out. The club needs two or three good goalkeepers, so when Shay comes back from the Euros it will be a big bonus and we’ll see what happens.”