It still remains likely that Luka Modric will leave Tottenham Hotspur this summer, but whilst there is a chance he will stay, Andre Villas-Boas has left the door open. 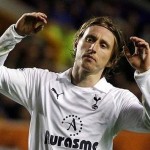 The Croatian international spent much of last summer trying to engineer a transfer to Chelsea, but Spurs chairman Daniel Levy simply refused to sanction the exit of a player who had just the previous year signed a new long-term contract. 12 months on and the playmaker has now set his sights on a move to Real Madrid, refusing to join his current team-mates on their US tour in an effort to speed up a transfer.

So far, the Spaniards are thought to have gone as high as £27million for the 26-year-old, but Tottenham are holding out for at least £35million. And as Modric still has four years left on the six-year contract he so willingly penned in 2010, there is no reason for the Londoners to lower their valuation of a player Harry Redknapp, their former manager, once claimed never gave a moment of trouble.

Such a boast could no longer be the case; in fact, it seems quite the opposite. In the knock-on effect of Modric’s demands to head to Stamford Bridge last year, where he would have linked up with Villas-Boas, he was omitted from the opening game of the season when Manchester United coasted to a 3-0 win at Old Trafford, and he was only forced into the action for the following match, a 5-1 home reverse to Manchester City, due to injuries to other players.

He eventually did buckle down to do the job he is so fantastically paid for, but a year on and he is again making headlines for the wrong reasons. He skipped training on Friday and was nowhere to be seen the following day when his team-mates boarded the plane to the States; that he was in his homeland was only discovered when Rafael van der Vaart called him on his mobile, only to be greeted by a Croatian mobile phone network’s messaging service.

Modric has since apologised for his actions but he will not be linking up with the rest of the squad for their pre-season preparations, and will now be hoping Real coach Jose Mourinho will increase his offer for his services. In the meantime, Villas-Boas has left the door ajar for the midfielder, explaining that the apology has been accepted and indeed welcomed, and that he still hopes the player will decide to stay at White Hart Lane.

“His apology comes and it is well welcomed,” said the former Chelsea boss, who must be wondering if he will ever get the chance to work select Modric in one of his sides. “Hopefully he will make the right decision in the future. We just have to wait on the bidding clubs to offer the right value for a player of big dimension. He is still our player at the moment and at the moment I am counting on him.”

If Villas-Boas succeeds in persuading Modric to stay on for a fifth campaign in North London, he must then task himself with getting the best out of an unsettled player in much the same way Redknapp did last season. At the same time, the Portuguese coach must wonder if keeping an unhappy player will have a damaging effect on a dressing room he will be desperate to get onside after his experiences at Stamford Bridge.