Kevin Ball has been placed in temporary charge of Sunderland, after Paolo Di Canio was dismissed just 13 matches into his disappointing spell.

The Italian was a controversial appointment last season, when the Black Cats were battling relegation and the decision to sack Martin O’Neill was made. His objective was simply to keep the club in the Premier League, and this he did this by memorably beating rivals Newcastle United 3-0 at St James’ Park and then beating Everton 1-0 at home.

During the summer Di Canio signed a whole host of new players, many of which are inexperienced or unaccustomed to the game in England, and also allowed fan favourites Simon Mignolet and Stephane Sessegnon to leave. The latter was on the scoresheet on Saturday, scoring the first in West Bromwich Albion’s 3-0 win against his old club.

This defeat was the final straw for the Stadium of Light board, who dismissed their manager on Sunday evening. As the search for a new manager begins, academy coach Ball, who racked up 340 league appearances for the club from 1990 to 1999, has been given the role for the League Cup clash against Peterborough United on Tuesday night.

This will be the second time the 48-year-old has been placed with such responsibility, having previously held it for 10 games following the sacking of Mick McCarthy in 2006. Although he only won one of those games, he only lost twice, with seven matches being drawn. And whilst the former player didn’t hesitate in taking the reins again, he admits it is a slightly different situation to that in which he was last given the job.

“The situation last time was slightly different to this time, but it did give you an experience, whether it be for one or 10 games,” he said. “I enjoyed it last time and I hope I feel the same way about this one as well.  I have coached for 10 years, so within that, you do so many things that a manager would do anyhow, it’s not a fantastically, unbelievable step.”

Ball, who could still be in charge for the visit of Liverpool on Saturday, doesn’t appear to be a serious candidate for the position on a permanent basis. The early frontrunner is Roberto Di Matteo, who won the UEFA Champions League and FA Cup for Chelsea, ex-Brighton and Hove Albion boss Gus Poyet, and former Stoke City manager Tony Pulis. 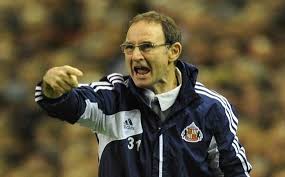